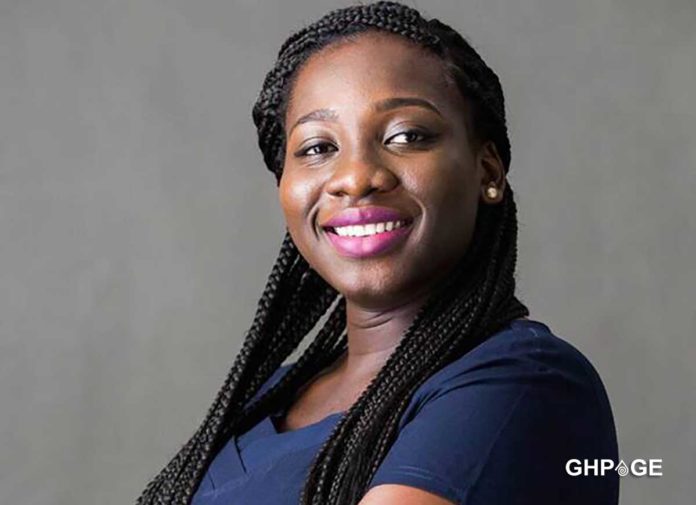 It’s now a common practice to see social media users join various groups on the platform with the idea of learning and entertaining themselves.

For some period of time now, groups such as Trotro Diaries, Tell It Mums, Tell It All as well as other groups have been groups that have a lot of members. It’s now very common to take a lady who is on Facebook phone and realize she is a member of Tell It Mums group.

Since the group was created for ladies it’s very difficult for men to know the dealings that happen in the group.

A former member of the group has come out to disclosed that being a member of the ‘Tell It Mum’ group almost corrupted her mind about men.

According to a long post by the lady identified as Priscilla Sherrie, it suggested that feminism corrupts the mind to the point that it really makes one bitter.

Read what she posted:

“A few weeks ago I finally exited a group on Facebook called Tell It Mums. A friend added me in the first quarter of last year.

Being in that group caused havoc to my mind and the way I perceived men. The percentage of bad posts in that group far out weighed that of good posts. So much that even if a good post was approved by the admin, there will definitely be some bad comments beneath the post.

I remember very well there was this particular post where a lady who had been married for some time sent a private message to the admin to post. Her message was on the fact that not all men were evil and that marriage could be enjoyed like she was enjoying hers. People actually came to comment that she hadn’t been married long enough to see her husband’s ‘true colours’. Others said she shouldn’t come back like a previous poster who also came to praise her husband and later found out some secrets which were pushing her to commit suicide.

My point is, Tell It Mums was feeding my mind with a whole lot of negativity. I began to question my male friends, my relationships and men in general. The content was transforming me into a bitter, broken monster who chose to believe all the wrong posted there. All this was because my mind was not protected.

Romans 12:2 tells us we mustn’t be conformed to this world but be transformed by the renewing of our minds.

And do not be conformed to this world, but be transformed by the renewing of your mind, that you may prove what is that good and acceptable and perfect will of God.
Romans 12:2 NKJV

You can’t renew your mind if you keep feeding it wrong. Even if you do manage to renew your mind, you just keep undoing the effect once you go back to read such content.

For those thinking they just read such negative content for reading sake. The effect is even worse, almost like how a secondary smoker suffers even more than the primary. You may not think too deeply on what you read in the present but your subconscious mind is diving deeper and helping you form morals and conclusions based on what you have read.

Stop reading such negative stuff! Transform your mind! If you need answers to your marriage, relationship or life how about reading the word of God? If you feel that particular question you have is a ‘Grey one’ , approach a more matured Christian (who you can identify by the fruits borne) and have an honest conversation. Running to such pages and social media for answers is your own undoing.

I have finish.
Have a fruit Monday.” 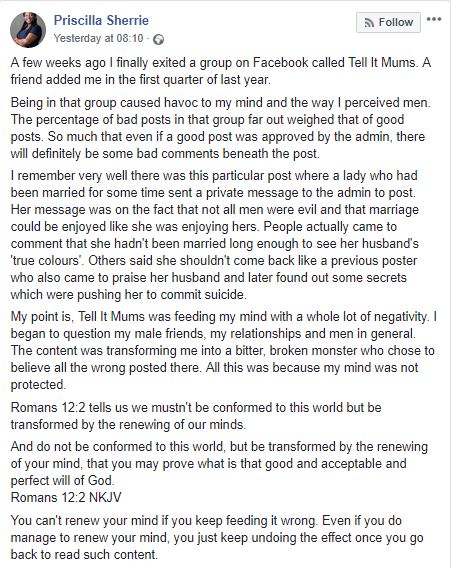 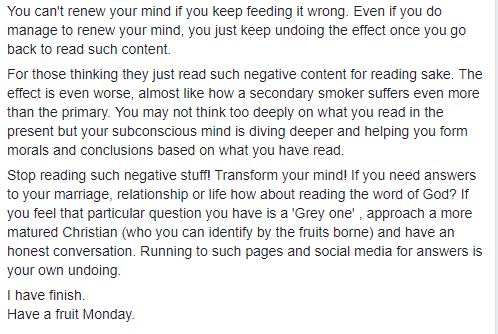