Video: The lady who Publicly turned down her boyfriend’s proposal in the viral video speaks 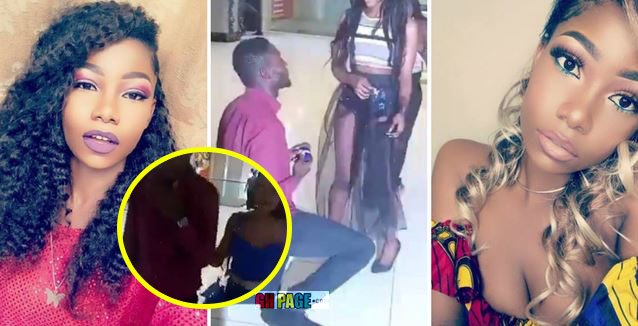 Ghpage.com published a viral video on the official Facebook page and in the video, a lady was being proposed to by her boyfriend at the mall but unfortunately for the man, the lady walked away.

It became a shame and it only took the lady’s friend to console the young man from the embarrassment.As usual, there were lots of comments and social media commentaries condemning the young lady for embarrassing her boyfriend in such a manner.

But, there seems to be more to it as the lady identified as Symply Tacha who is at the center of the whole thing has come out to speak.

The young lady in an attempt to explain why she did that in an instapost wrote;

‘I’m sorry i dissapointed my friends and family present there, its my fucking birthday, why ruin it with an engagement, did you talk to me about it??!! NO! now i have people insulting and calling me names on blogs! I blame you Enzo
you fucked my bestfriend (Kandy) and also slept with her kid sister, how did you ever expect me to forgive you!! I feel very embarrased i have been crying i regret saying yes to you in the bus on our way to Oyo. You played me???
What will people say about me, you embarrased me at the mall!!!
I will never forgive myself lord knows’

If you have not seen that video yet—here’s it below;

The founder and leader of International God's Way Church(IGWC) Angel Daniel Bishop Obinim has revealed he saved some people from the deadly...
Read more
Lifestyle

Some members of Moment of Glory Prayer Army popularly known as MOGPA have launched an attack on Member of Parliament for Assin...
Read more
Lifestyle

Ghpage, moments ago shared the news about the sudden and painful death of Despite Media's Kwadwo Annor Wiafe. READ...
Read more