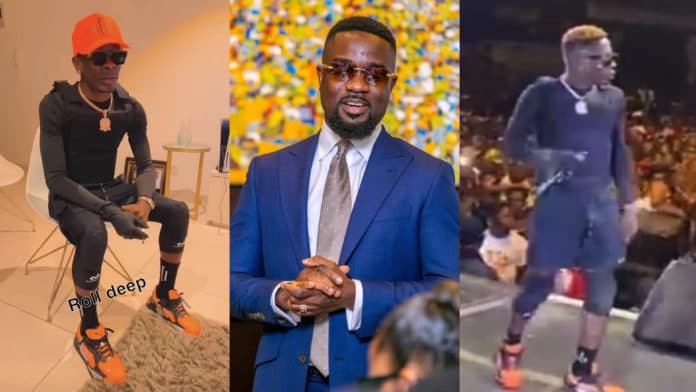 Shatta Wale’s fashion taste has been questioned following his choice of attire for his latest performance on stage.

At a mega showdown at Nungua, a suburb of Accra, over the weekend, Shatta Wale gave fans and critics many reasons to doubt his appreciation of fashion and style.

Many have asserted that Shatta Wale’s dressing was absolutely shambolic considering how he even selected the colours to wear.

“He looked like a hunter going out to hunt” some fans have trolled him after photos emerged on social media.

On the back of that, Shatta Wale’s arch-rival Sarkodie has been mentioned as a perfect example of an artist who understands the role fashion plays as far as his career, personality and branding are concerned.

“When you look at Sarkodie, you will think Shatta Wale does not bathe,” these were some of the comments that were passed by social media trolls.

As a fine artist, Shatta Wale has failed tremendously at investing in his personal outlook. On several occasions, he has had wardrobe malfunctions or just did not look the part.

As a result, he had been advised by netizens to pick a leaf from the book of Sarkodie and try to copy the Sarkcess CEO’s style of dressing and emulate his highly-rated fashion sense.

@Sark1gad wrote: He smoke saaa he can’t even make fresh

To be fair, Shatta Wale needs a world-class stylist. What do you say?