10 legacies left behind by the late Kofi Annan 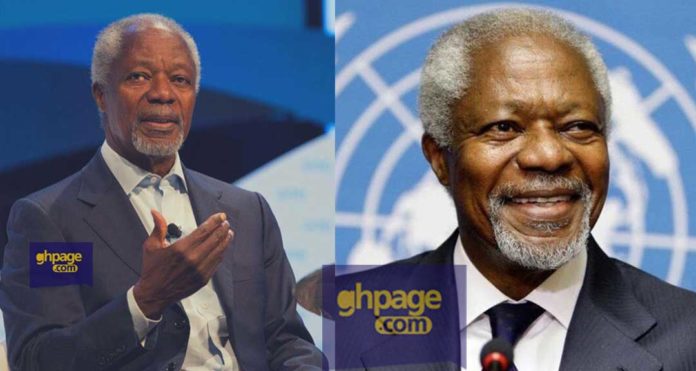 The world as a whole is yet to come to terms with the sudden demise of Ghanaian diplomat and the former United Nations Secretary-General Kofi Annan who kicked the bucket last Saturday.

Kofi Annan stood for peace, making him in the year 2001 whiles serving as the General Secretary got awarded alongside the UN for their work for a better organized and more peaceful world.

Also Read: Kofi Annan’s family and foundation give details of his death

Let’s take a look at some achievements attained by the first Ghanaian and African to ascend to the position of a UN Secretary General.

The Kofi Annan International Peacekeeping Training center which was established in 1998 equipped many African countries with the strength to deal with conflict resolution. The peacekeeping center has further equipped many governments with the military skills of restoring peace and stability in war and conflict-prone areas across the globe.

Breaking through ranks of the UN

Kofi Annan emerged from the ranks of United Nations staff were he was serving as an under-secretary-general to the Secretary-General of the UN. He remains the only staff of the United Nations (UN) in the history of the UN to achieve his feat.

Also Read: Reports have it Kofi Annan died from a protracted illness

Reforms in the United Nations

The late Kofi Annan developed a comprehensive reform programme, which was designed to improve the UN’s approach towards its work and increase the effectiveness of the international system.

In addition to this, he continually advocated for the Millennium Development Goals in Africa, the rule of law, and human rights.

In the wake of the 2006 settlement dispute between Cameroon and Nigeria over the Bakassi Penninsula, Kofi Annan managed to mediate a settlement which prevented hostilities between both African states.

The late Kofi Annan played a pivotal role in the fight against the spread of HIV/AIDS in Africa. During his tenure, Kofi Annan in the UN Security Council adopted resolution 1308 which picked out HIV/AIDS as a major security threat the world.

The launch of the Global Compact campaign in 1999

This initiative was one of the greatest achievements by Kofi Annan. It paved way for the promotion of corporate social responsibility among business organizations in the world.

It was under the tenure of the late Kofi Annan that the world experienced an appreciable level of peace and reconciliation. Kofi Annan was awarded the Nobel Peace Prize in 2001 for their work for “a better organized and more peaceful world.”

According to the UN, Kofi Annan “played a central role in the creation of the Global Fund to fight AIDS, Tuberculosis and Malaria, the adoption of the UN’s first-ever counter-terrorism strategy, and the acceptance by Member States of the “responsibility to protect” people from genocide, war crimes, ethnic cleansing and crimes against humanity”.

The late Kofi Annan was a passionate advocate of human rights and a strong believer in the universal values of equality, tolerance and Human Dignity.

He was integral in the establishment of two new intergovernmental bodies; the Peacebuilding Commission and the Human Rights Council in 2005.

Calming nerves over the Iraq invasion

During the 2003 Iraq invasion, there were debates over whether or not the entire invasion was justified. Kofi Annan stood his grounds during this diplomatic standoff – declaring the entire development as “illegal”.

Kofi Annan boldly argued that the Iraq invasion was not sanctioned by the UN security council or in accordance with the UN’s founding charter.

One thing that surprised many was the fact that despite his power and influence as the secretary-general of the UN, Kofi Annan still maintained his identity as a Ghanaian and proud son of Africa. Born in Kumasi on 8 April 1938, Kofi Annan still identified himself for the Ghanaian he is and he was respected across the world for this.