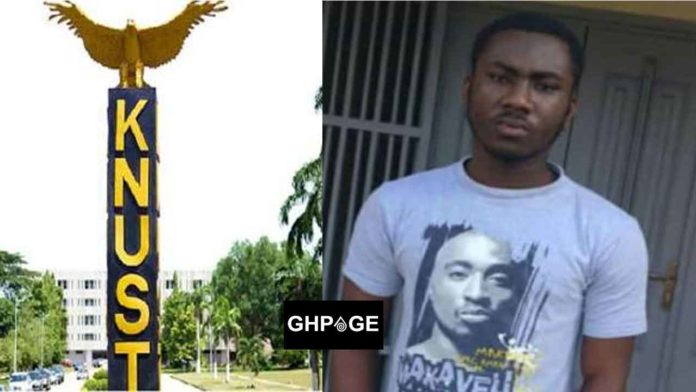 A final year student of the Kwame Nkrumah University of Science and Technology (KNUST) has committed suicide by hanging.

The deceased identified as Frederick Asamoah Frimpong was found hanging in his room by his parents.

The sad incident happened at Adoato, Bantama in the Ashanti Region when he went home following the UTAG strike.

The Uncle of the deceased, Kofi Abrefa Buziah disclosed in an interview that Frederick locked himself in his room and after breaking down his door, they found him hanging on the ceiling.

“We knocked on his door several times, called his phone but he didn’t respond. We then called a carpenter to break into his room where we discovered him hanging on the ceiling”, the Uncle revealed.

Well, according to new information, the level 400 student allegedly killed himself after losing a bet.

A post going round on social media indicated that Frederick was in debt to a tune of 200,000 cedis and decided to use the money he had to bet.

He had with him 60,000 cedis and staked a bet with it to enable him to pay his debt but apparently, he lost the bet.

Due to this outcome, Frederick decided to take his own life.

However, the body of the student has been deposited at the Okomfo Anokye Teaching Hospital for autopsy.