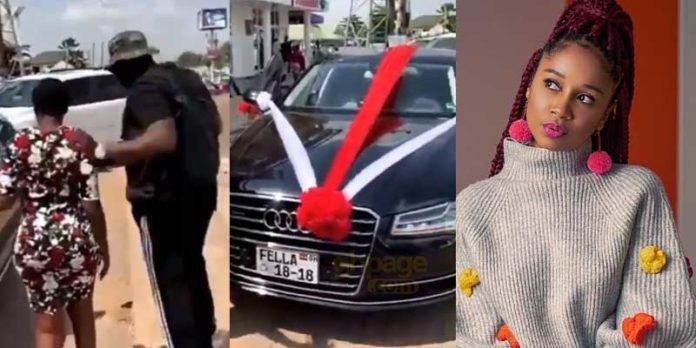 Rapper Medikal has broken the silence over the car he bought for Fella Makafui and brouhaha surrounding her seized car.

It could be recalled that Fella Makafui and Medikal grabbed all the attention at the latter part of November; from her ex-boyfriend seizing her two cars and Medikal boldly replacing them with two customized number plate cars.

According to reports that surfaced on various social media platforms after Medikal surprised Fella with a new car suggest that Medikal didn’t buy a brand new car for Fella Makafui as we are already informed.

Read also: Reason, why Fella Makafui’s cars were seized by her ex-boyfriend, pop up

But in an interview with Andy Dosty on Hitz FM, the rapper, who touched on the car he bought for Fella Makafui stated that it wasn’t for media hype but was out of love he had for Fella Makafui.

He further revealed that even though some people still believe his break up with Sister Derby is a mere stunt, it isn’t so.

“They see it to be staged but it wasn’t. It is because they see it to be surreal. I already wanted to surprise Fella Makafui. I woke up and I saw the video of her ex-boyfriend asking for his cars back. I was already getting her a car and she was unaware because I wanted to do the paperwork first… I didn’t want her name tarnished.”

he also touched on the fact that he never bought a car for Sister Derby but there are other things he did for her which he can’t publicly disclose.

“I never bought her a car but there were other things I did for her that I can’t disclose. I can deposit a million dollar in her account and it’s not something I would wanna disclose,” Medikal explained.