Video of where the Takoradi Missing Girls’ dead bodies were found 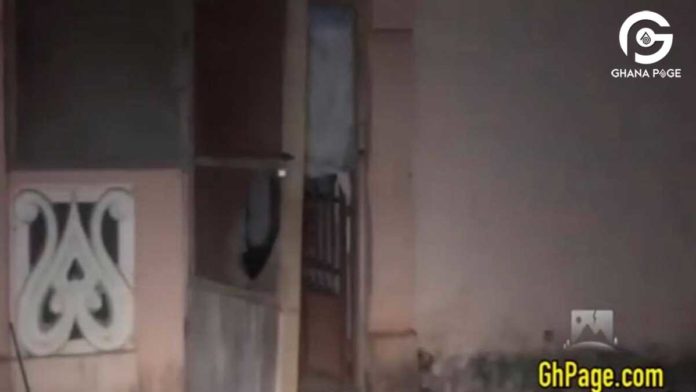 News broke yesterday that remains and skulls of two dead people have been retrieved at a location believed to be the dead bodies of the 3 missing Takoradi girls.

The police have confirmed they retrieved human remains from a septic tank on a property previously occupied by the key suspect in the kidnapping of the three Takoradi girls, Samuel Udoetuk-Wills.

The Nigerian suspect, Samuel Udoetuk-Wills himself led the police to the location when he finally decided to speaks after 6 months of his arrest.

According to the police, The skulls were retrieved Friday night from a septic tank at Kasaworodo a suburb of Takoradi. The suspect led the police to the area located near the hostel of the Methodist Girls Senior High School.

With the aid of sniffer dogs, the police stormed the Kasaworodo house of the accused person, cordoned off the area at about 5:30 pm on Friday, 2nd August 2019 and with the help of the Prisons Service, they emptied the septic tank and discovered the dead bodies.

SEE HERE: Ghana police finally speak on the death of the Takoradi Missing Girls – Here is their message [Statement]

A video of the location where Samuel Udoetuk-Wills in Kasaworodo has been obtained by Ghpage.com.

In the video, ladies clothes were scattered in Wills room. Some of the clothes allegedly belong to the dead girls. Where their remains were retrieved is also captured in the video.

The Ghana Police Service has not confirmed the remains are in fact the missing girls despite the suspect taking them to the location which he claims to have hidden their dead bodies.

In the statement released a few moments ago, the police revealed the remains retrieved will be sent to the forensic science laboratory of the Ghana Police for analysis and further investigations.