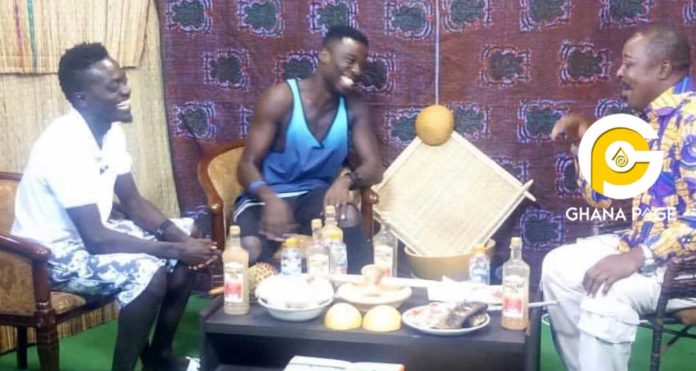 Kumawood comic actor Lil Win has fired his colleague actor Kwaku Manu about some comments he made against him some time ago with the latest one being when Kwaku Manu interviewed Lil Win’s wife Pat on his “Aggressive interview” show.

According to Kwaku Manu in an earlier interview stated that Lil Win told directors not to cast him and Kwaku Manu in the same movie because he didn’t want to work with him anymore an excuse that made him sit home for almost three years without being featured in a movie.

He continued and made mention of the fact that he had helped Lil Win during his early days of acting but failed to show his appreciation when he made it big in the movie industry.

Also Read: I was already a star before Top Kay and Zack met me – Lil Win

But Lil Win reacting to these comment in an interview with Ghpage TV revealed that he has never asked any movie producer or director not to cast himself and Kwaku Manu in the same movie and he would never do that to anyone.

He went on to add that it was rather Kwaku Manu who stopped talking to him but even during that time, Kwaku Manu used to call his wife Patricia on phone where they both talk about him behind his back but he never complained about it.

On whether he has been ungrateful to Kwaku Manu, the ladder hitmaker revealed that all the help Kwaku Manu was talking about had to do with when he was coming up and Kwaku Manu used to pick him up in his car to various locations for shooting because Kwaku Manu had by then become popular and had a car.

He continued that aside everything he still loves Kwaku Manu and sees him as a senior brother and won’t do anything to hurt him.