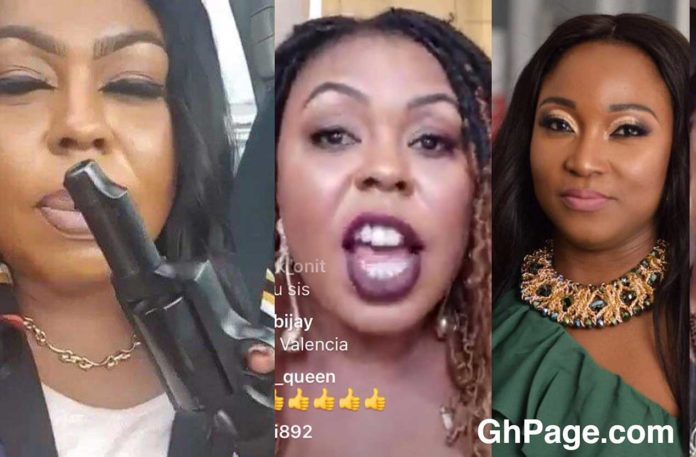 UK based vlogger Maame Ng3g3 has responded to controversial comedienne Afia Schwarzenegger after she recorded a video and insulted both Maame Ng3g3 and Politician Akua Donkor.

The fight between Afia Schwar and Maame Ng3g3 all started after Afia in a video insulting the founder and leader of Glorious Word Power Ministry International, Rev Owusu Bempah something that made the UK vlogger angry and she responded accordingly.

Some few days ago, Afia replied back and stated that she could pay for Maame Ng3g3 to be killed in her UK base which would just cost her a few pounds but she is not having time for a poor thing like her and went on to mention that actress Akuapem Poloo is a better human being than Ng3g3’s mother.

Now, Maame Ng3g3 has responded to Afia Schwar again and this time she revealed she is not going to back down attacking the self-acclaimed queen of comedy until she stops attacking and insulting older people in the country.

She went on to also insult Afia Schwar asking her to reveal the father of her children since the kids are eager to know who their father is.

According to Maame Ng3g3, failed presidential candidate Akua Donkor is far better than Afia and her mum who has never asked of the price of a piece of land before.

She also went to say that the only thing Afia is good at is sleeping with men since that was the work she was doing in Ghana before flying to South Africa to continue her prostitution.