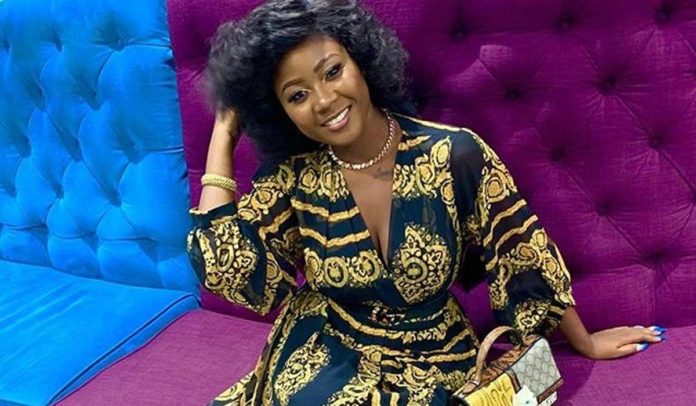 Victoria Lebene Mekpah Wife to Eugene Osafo Nkansah has been caught in her own web of lies as her plan to deceive Ghanaians that she was overseas honeymooning in Greece was foiled.

Yesterday, Victoria Lebene posted a photo of a nicely set breakfast in a location believed to be Santorini, Greece. The geolocation of her post was also set to Rhode Island. However it was soon discovered that she had stolen the photo off the internet and was deceiving her gullible followers.

Realizing she had been made out, Lebene turned off the comment section but later restored it after she felt the storm had blown over.

However it hadn’t. She posted another photo which is also ostensibly from her vacation. another and captioned it;

“I made my special honeymoon recipe, homemade vegetable and fish sandwich and salad”

Many of her followers including Salma Mumin, an Actress and socialite were not buying her deception any longer demanded to see her face.

Several other Ghanaians were demanding  the same as the lies were obviously getting out of had. They clamoured, madam just show us your face in one of those ‘honeymoon’ photos.

But we all know she can’t. Now the question is why do people like pretending to be what they are not?

No one cares if you decide to go to a serene location in Keta, Dixcove, Takoradi or Elmina for your honeymoon. But to throw dust into our eyes by deceiving us that you are in Santorini? That’s just wrong.