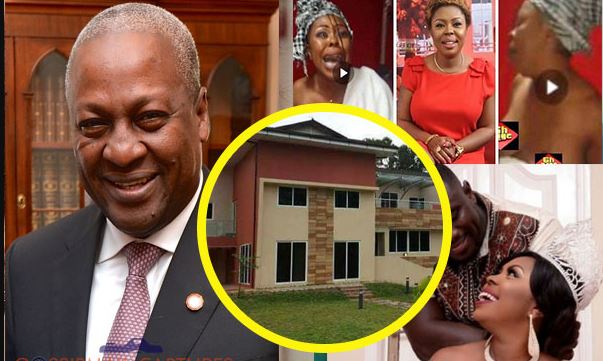 Afia Schwarzenegger, in one of the leaked audios, could be loudly heard saying that, she used a man’s money to buy the house she is living in.And that man is said to be the former president of Ghana, John Dramani Mahama.

According to the controversial lawyer the house Television Personality, Afia Schwarzenegger claims it is hers was bought for her by former President John Dramani Mahama.

Speaking On Kumasi-based Abusua Fm on Friday, September 8, 2017, he alleged that before the house was bought, her husband, Lawrence Abrokwah added some money indicating that the actress cannot claim the house as hers.

He added that all documents of the house bear the name of Afia Schwarzenegger.

“The documents covering the house is in Afia’s name, the husband topped up the proceeds from the sale of an SUV car President Mahama gave her so it is not true she alone bought that house”, he alleged

On whether both are divorced or not the lawyer stated that there is nothing like separation of marriage in our laws and that What Afia did can’t be justified in any way.

READ ALSO: Afia Schwar reacts to her [email protected] Video&Photos~Says her ex-hubby was after her money

He revealed further that attempts were made to settle their marriage differences but Afia Schwarzenegger in any of the attempt parading the neighborhood naked – hurled insults and threatened anyone with a curse who tried calling for a truce.

READ ALSO: Audio: Afia Schwar rain curses with Antoa on anyone who tries to reconcile her failed marriage

According to him, ever since the misunderstanding ensued between them, Afia threatened to jail the husband for taking video of her nudity indicating that it is obvious that Afia married the guy because of his good looks.