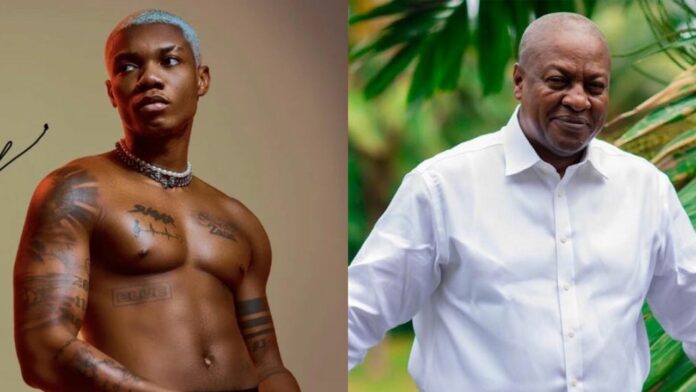 A Ghanaian musician is being called out for a series of tweets he made in the past about former President Mahama.

KiDi, then, had taken a swipe at the erstwhile Mahama administration by describing his speeches as useless.

He went on to chastise Mahama for failing to solve Dumsor and doing nothing about the economy.

Some Twitter folks have dug into the archives and brought out some of these tweets, which he also made about Voltarians and Northerners.

KiDi had immaturely insinuated that people from the Volta Region and the North were clueless about voting for the NDC after the 2012 elections.

He subsequently used the late Amissah Arthur, the late Atta-Mills, and President Akufo-Addo to make jokes.

Below are screenshots of some of the tweets KiDi made…

Beno Sarkcess wrote: By now Kidi dry get plenty notifications, he go think say menners dey spoil there for en EP give am or some Grammy nominations drop, he go come online na old tweets wey set agenda give am

GhanaSocial wrote: Thank God Kidi’s career is about die.. that guy was negatively influencing the children!

Ghana Yesu wrote: Kidi was once an underground agenda boy before he became musician and man has become big. Another win for twitter agenda boys.