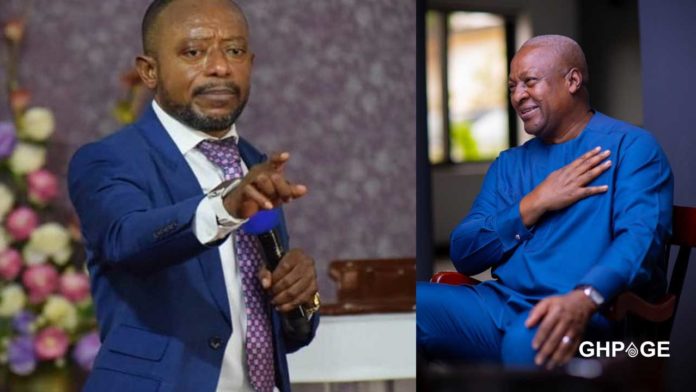 The leader of Glorious Word and Power Ministry Rev. Owusu Bempah seems to be worsening his case against former President John Dramani Mahama as he has in his latest submission accused him of lining up human beings to be sacrificed so he can win the 2020 election.

According to the Man of God who is tagged to be a member of the NPP, God revealed to him in a vision that the NDC presidential candidate is planning on sacrificing human lives to enable him to win next year’s elections.

Rev Owusu Bempah said “there is a former president of Ghana who wants to sacrifice some people for power. Listen to me very well.”

“God has mentioned to me the names of the people he wants to kill. He is an ex-president.”

“God has asked me to declare this to the whole country.” He stressed to the church revealing the said ex-president wants to be president again at all cost.

Though he failed to mention the name of former President Mahama, we all know that he is the only ex-president who is seeking to be re-elected as President.

Maybe that might be the reason why he was blocked by fmr. President Mahama’s bodyguard when he tried to exchange pleasantries with him at an event a few days ago.