Man arrested over attempted ritual murder handed over to CID 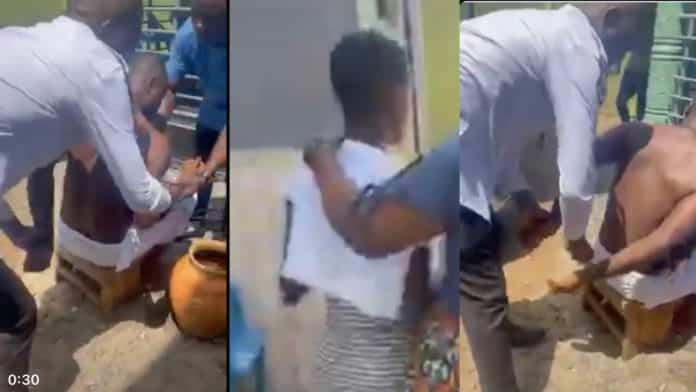 The Criminal Investigations Department at the police headquarters has taken over the case of a 42-year-old businessman who allegedly tried to have his daughter killed for alleged ritual purposes.

Evans Oppong was apprehended on Friday in Oyibi after a herbalist whom he had consulted reported him to the police.

The case was initially handled by the Adentan Divisional Police Command but he has been handed over to the CID for further investigation and prosecution.

Citi News sources say that Prosecutors at the CID headquarters are reviewing the evidence and will arraign the suspect soon.

The herbalist, who circulated a video of the arrest online, Nana Adu-Boafo, said: “The girl’s father came to see me, he told me he just landed in the country after staying overseas for a while, and it hasn’t been easy for him.”

“He told me he is a father of 12 and is offering two of them for money rituals. He offered me GH¢10,000 and other good surprises when the job is done.”

READ ALSO: Wife of man who attempted to kill his own daughter for money rituals speaks [Video]

Meanwhile, the wife of Mr. Oppong has responded to her husband’s alleged criminal move with state broadcaster GTV.

Watch the video below as she narrates her side of the story.

The herbalist who blew an alarm on the suspect has also been exposed as a serial blackmailer and fraudster.

According to a series of Facebook posts shared by social commentator Kwame A plus, the man has a long history of extorting money from people and/or setting them up.