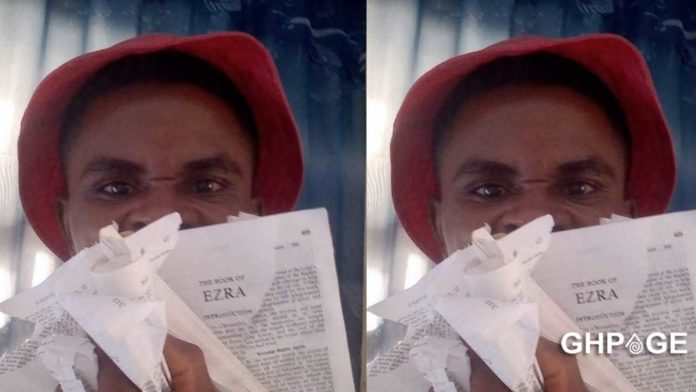 Gradually, Africans young are shunning away from the good book of the Christians known as the Holy Bible and embracing the traditional style of worship stating that that is the original culture of Africans.

A young man on social media identified as Udumiri Nwakalu has committed an offense which has been considered as blasphemy by some Christians after destroying the bible.

According to him, he has been using the leaves of the bible as toilet papers for some time now because he doesn’t see the use of the holy bible.

Britain I am no longer afraid of the book you used to enslave my people, I tore it in the public today, I have proven to many that it’s just a book and words of men

On this day I liberated thousands of people from fear and chains. I am a proud fighter, we must continue to fight modern day colonialism.

You Christians have been burning several traditional shrines, you post it on
Facebook everybody cheer you and praise your nonsense Jesus.

Today I decided to show what it feels like. I have been using the Bible for toilet for about 3 months now just that I decided to make it public today and you talking nonsense in my posts.God punish all of you there I don’t care.

I must follow my ancestry ways I don’t I care about any nonsensical nonsense human being here. I destroyed the Bible, it’s from the devil

Many are mad but few are roaming.”