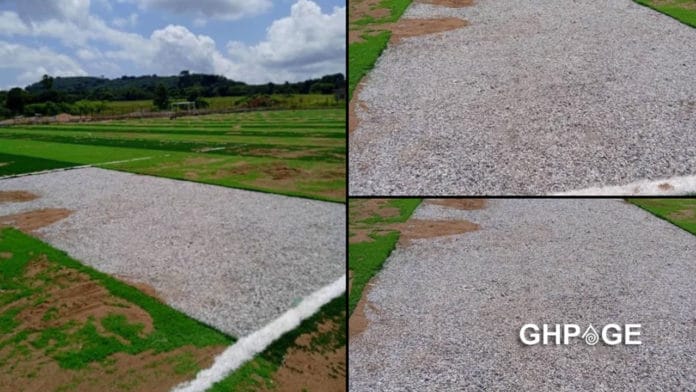 A 21-year-old man who stole parts of the artificial pitch at Drobo Faaman to use as carpet in his room has been sentenced to 7 years in prison.

Gideon Asuako – a resident of Dwenem in Jaman South Municipality – was convicted after he pleaded guilty to three counts of unlawful entry, unlawful damage and stealing.

In a subsequent tweet, he revealed that he had been informed by the Obaahemaa of Faaman that the culprits had been arrested after a search.

“A search party was put together and they found parts of the artificial pitches in the rooms of the thieves used as decoration,” he added.

Following the arrest, Asuako was arraigned before the Berekum Circuit Court where His Lordship Osei Kofi Amoako convicted him on his own plea.

This update was given by Saddick Adams in a recent post on his Twitter page, tweeting that “a prison officer friend at Sunyani confirms to me he has just been brought there to begin his sentence term.”

Social media users have been divided over the verdict. Some believe the sentence is apt while others believe it was too harsh.

Check out some comments sampled below:

Nungua Cardi B: Politicians that have stolen millions of cedis are still free

He was making good use of it. But waa see the state of the pitch.

Quayson: 7 years for a small portion…I’m sure he didn’t have a lawyer