Accra:Man shock bankers as he stormed UniCredit with mattress to sleep 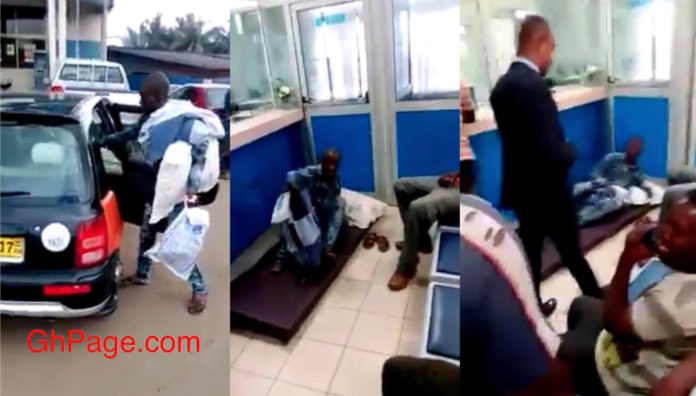 A Ghanaian young man shocked the bankers and staff of UniCredit Apenkwa branch in the Accra Metropolitan assembly when he showed up at the bank with his mattress, pillow, bedsheet, and other stuff to sleep inside the banking hall.

His reason? The young man claims he saves with UniCredit Apenkwa branch and he has been to the bank multiple times to withdraw his money but he keeps being told: “the service is down”.

SEE ALSO: Read The Profile Of All The UniBank Executives Who Are Likely To Lose Their Jobs From The BoG Takeover

So yesterday, 17th October 2018, the young man whose identity is yet to be established stormed UniCredit Apenkwa branch with his beddings, mattress, and other stuff to sleep there till he gets his money.

The bankers looked on shocked and could not understand what is really going on at their banking hall. For fear of making the news for more wrong reasons, they kept their distance from the gentleman.

SEE ALSO: Sarkodie exposed after he lied to a Cameroonian rapper

WATCH THE INCIDENT BELOW

The banking sector of Ghana is currently undergoing serious challenges. Many banks have been closed down by the Bank of Ghana whiles some have been consolidated.

Panic withdrawing is also collapsing several banks. But the Bank of Ghana has assured the sector will emerge more vibrant after this initial challenges and set back

SEE ALSO: Fvck boy had the worse day of his life after being caught by main boyfriend