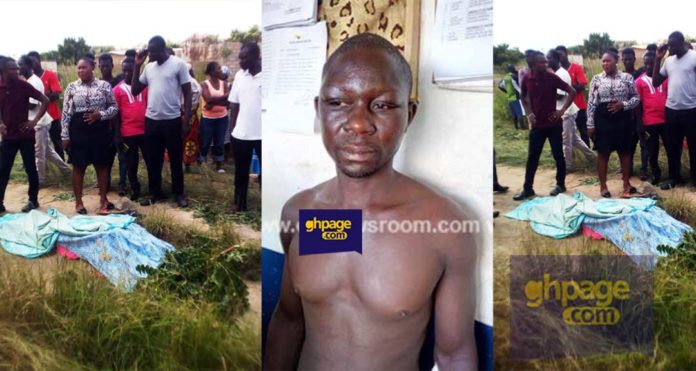 Gloria Akorley, a 32-year-old woman has allegedly been stoned to death by her husband Nicholas Akorley at Kasoa, in the Central Region, Citinewsroom reports.

According to the reports sighted by Ghpage.com, Nicholas Akorley has for a while now been threatening to kill the wife for rituals whenever they have any quarrel. He has since been arrested by the Kasoa police.

A 32-year-old woman, Gloria Akorley, has been stoned to death allegedly by her husband at Amuzukope, a suburb of Kasoa in the Central Region.

A daughter of the deceased, who confirmed the death to Citi News said her father usually engages her mother in heated arguments and occasionally threatens to kill her and use her for rituals.

Bernice Akorley said her parents’ marriage had grown sour as the two have for a while not the best of friends. According to her, she only recollects that her mother had a phone call early Thursday morning and went out.

“We only heard that she has been murdered this morning” a traumatized Bernice Akorley narrated.

SEE ALSO: Counselor Lutterodt has the perfect advice for DJ Switch’s parents and we all agree it’s his best advice so far [See]

Paul Amanyo, a neighbor, explained to Citi News that the woman was killed with a hammer and cement blocks from an uncompleted building.

He indicated that he heard screams from another neighbor that a woman had been killed and upon rushing to the scene, they found Gloria Akorley

Paul Amanyo said they called the deceased’s husband, Mr. Coffie to inform him about the unfortunate incident, but he said he was in Koforidua and could not afford the fare back to Accra.

Paul Amanyo further said they later found Mr. Coffie in the house organizing his belongings in an attempt to flee the area.

SEE ALSO: After paying $20k bride price, Elikem has filed for divorce just 3 years after marriage but Pokello says no to the divorce [Details + Photos]