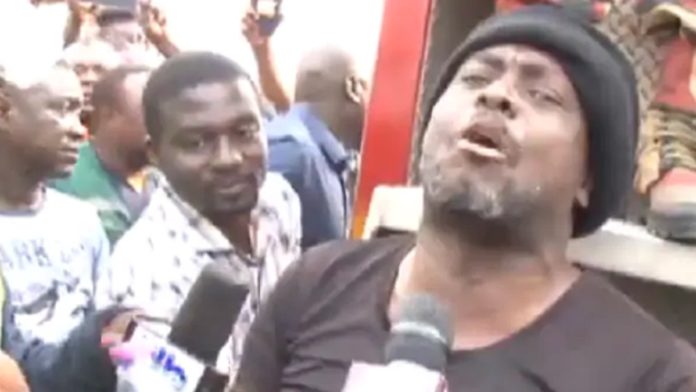 Man who threatened to commit suicide at the Obetsebi Lamptey Circle because his wife abandoned him has been arrested by the police.

The man identified as Dr. Think Twice explained that his suicide attempt was on purpose and that was his way drawing Ghanaians attention to pressing issues.

He further stated that this is not the first time he has pulled off such a stunt and that he did something similar at the Kumasi market where he was arrested.

According to reports, Dr. Think Twice was able to climb the 20-feet statue with a ladder by the help of his two accomplices.

“I am the one that handles pressure in the country. Listen to me very well, if you heard about Dr. Think twice, I’m the one… I’ve appeared on TV station several times the last four years when I went to Kejetia and hanged myself.

I was asked why and I told them it’s all because of pressure and I hanged myself where I blocked traffic and the police came to arrest me and people asking me won’t I marry, give birth or my genital organ isn’t functioning. Is it pressure or not?

I want to discourage people from pressuring the young ones into early marriages. Those who are married also faces pressures from society to have children. As if that is not enough, those who have one or two children are pressured to have more”, Dr. Think Twice explained.

The police and the Fire service were present at the scene and after he was rescued, he was handcuffed and whisked away.

He was taken to the police headquarters for further interrogation as to why he caused fear and panic.