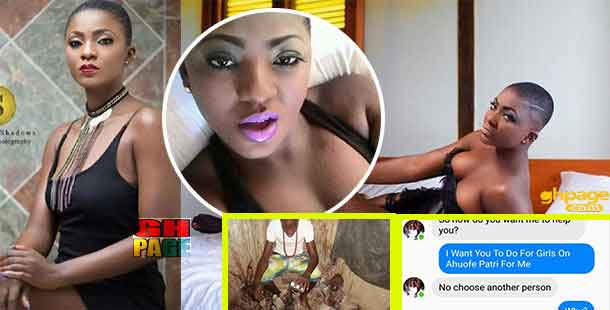 GHPAGE.com has chanced on a screenshotted conversation between a man and a mallam where the former wanted the ‘spiritual’ man to cast a spell on his admirer, Ghanaian actress Ahoufe Patri.

Indeed, the Ghanaian actress has so many admirers and it includes a man who is willing to go by any means to get her.

He even went to the extent of soliciting the help a spiritualist to cast a spell (for girls as called on the streets) on Ahuofe Patri.

But unknown to him, the spiritualist, who can only be identified as Mallam Fatao, was also interested in ‘Boys Kasa’ fame actress and told him to back off.

Interestingly, the Mallam, Fatao in the photo sighted by GHPAGE.com, plainly told his potential client that he was also interested in the actress.

The shocked client asked “Yehowa, even you?”, which the mallam shockingly replied again “fool, why, me I don’t have feelings?”

Of late, many spiritualists have taken over the social media site who do consultations and are constantly bombarding users with their outrageous claims of what they can do for them.

For the last few weeks, Ahuofe Patri, real name Patricia Opoku-Agyeman has been under attack on social media on a number of occasions.

Many of the attacks have come over her looks which some of her followers have been complaining which they think she is fast losing her beauty which endeared her to most of her fans.