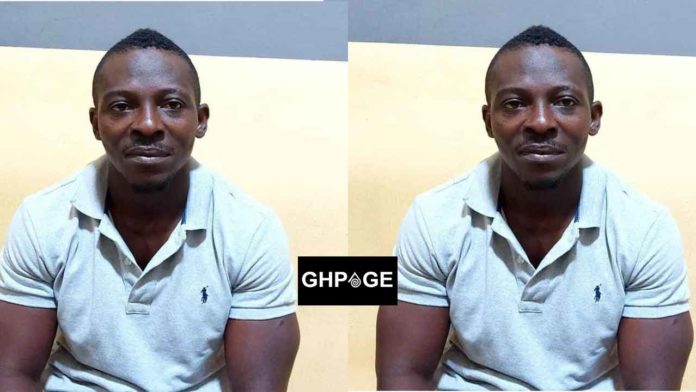 The man who was captured in a viral video firing shots into the air at A&C mall on new year’s eve has been arrested.

The suspect who is a military officer identified as Flt. Sergeant Nicholas Owusu Frimpong has been apprehended and is currently detained by the Military Police.

According to a police statement, the arrest was a combined effort by the Police and the Military Police.

“A collaboration between the Police and the Military Police has led to the arrest of Flt. Sergeant Nicholas Owusu Frimpong in connection with the discharge of a firearm at A&C Mall, East Legon, on Friday, 31st December 2021.

The suspect was arrested following police investigation of a young man captured on video footage firing several shots at A&C Mall purportedly to welcome the new year, 2022″, excerpts of the statement read.

On 31st December 2021, a man was captured in a viral video firing shots in the sky at a mall in East Legon.

The Ghana Police Service also offered a 5,000 cedis reward to anyone who could provide information leading to the arrest of the unidentified shooter.

According to the police, it is a crime to discharge a firearm in public without lawful and necessary occasion.