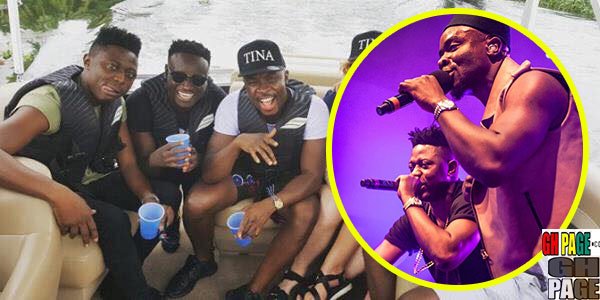 A member of the management team of popular music producer Killbeatz Jeffrey Addo has seemingly deteriorated the ‘tension’ between the producer and hiplife artiste, Fuse ODG.

In his attempt to explain the root of the moment tension between Fuse and Killbeatz, he has added more to the situation.

In an interview with Zylofon FM, he said Fuse could not throw Killbeatz out of his home, as the producer made Fuse who he is today. Reports from Abrantepa.com revealed.

READ ALSO: Kwame A Plus ‘Jabs’ John Dumelo Over Being “Fake”

In addition, Jeffrey said, that it took the intervention of some friends to convince Killbeatz to work with Fuse.

Another music producer Wei Ye Oteng, however, said Mr. Addo may have made the situation even worse with his remarks.

If Fuse ODG was to hear these comments, he would not be satisfied and his reaction will be justifiable, and the manager had the wrong choice of words; he said.

READ ALSO: Angry Fuse ODG throws Killbeatz out of his house after breaking several house rules and discovering a strange blood pot according to reports

Furtherly, he stated Fuse had the right to decide what to do with his own house as the property belongs to him and no one else.

Categorically, this is what Oteng said; “This guy goofed so much by even saying people had to beg for Killbeatz to work with Fuse. When greatness is achieved, all these things are nothing to write home about. Some things should remain among you people… If you don’t know how to talk, don’t talk… He is rather creating a huge enmity between Killbeatz and Fuse,”

Another popular music producer, Willi Roi has also expressed shock at the comments made by Jeffrey Addo.

Rio opined that: “For the manager to have said that the guy can’t sack Killbeatz, he doesn’t understand management. He is a ‘damagement’. What he has done is infuriating Fuse. Killbeatz has been so lucky that most of the people he makes a beat for, get somewhere, therefore, raise his brand. And for goodness sake, I don’t know anybody who could have taken Killbeatz that farther than what Fuse did for him. He should revise his notes and know how to present it.”