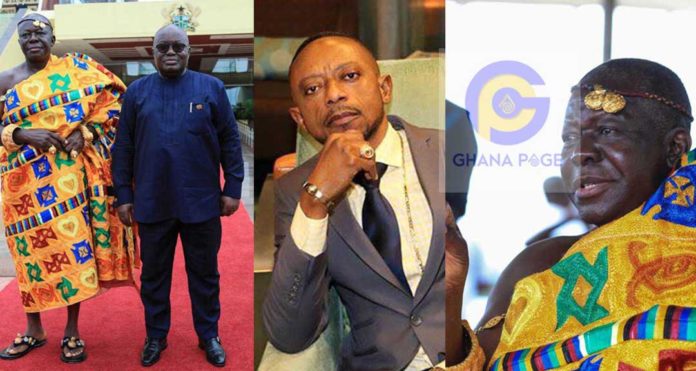 Rev. Owusu Bempah, the founder and general overseer of Glorious Word and Power Ministry has been given a strong warning to stay away from indulging the Manhyia Palace and its overlord, Otumfuor Osei Tutu II in his death prophecies or face banishment from the Ashanti Kingdom, his motherland.

This directive is coming from the Asante Youth Association according to one of the leading members of the association, Osei Kofi.

Osei Kofi made the decision of the Asante Youth Association known when he spoke with Kumasi based Nyira FM. The association wants everything Manhyia including the subchiefs and workers there to be taken out of Owusu Bempah’s

“We don’t need your fake prophecies…keep them in Accra. You were born in Kumasi and we were here with you before you moved to Accra. You are obliged to speak about anyone but do not incur our wrath by speaking about our King….we beg you. If you do not want our trouble when you are engaged in your prophecies on every December 31, keep out Manhyia. Let it be a no-go area for you. It is a warning and I mean it. Are you the only Man of God? When did you arrive? We shall banish you if you try that next time”, the group warned.

SEE ALSO: Leader of Zongo youth who attacked Owusu Bempah’s church reports himself to the police

“I Osei Kofi a member of the Asante Youth Association, I want to sit in the studios of Nhyira Fm and warn him. If you are speaking carelessly like a madman doesn’t dare bring it to Manhyia. If you speak like that to others, make sure you don’t venture into Manhyia with that style. Do not speak about anyone in Manhyia like you have been doing”, he issued a stern warning during a live studio discussion.”

“Don’t dare speak about our King and his sub-chiefs because they have adequate protection from their ancestors. If he is not aware he should go and read from the history books about the Kings of Asante and how long they lasted on the throne”, he revealed.

On 31st December watch night service, Rev. Owusu Bempah gave a lot of doom prophecies abought high profiled personalities in Ghana. One person whose name appeared in the death bucket list for 2019 was the King of Kings of Ashanti tribe

SEE ALSO: The King of Kings of Ashanti will die in 2019-Owusu Bempah