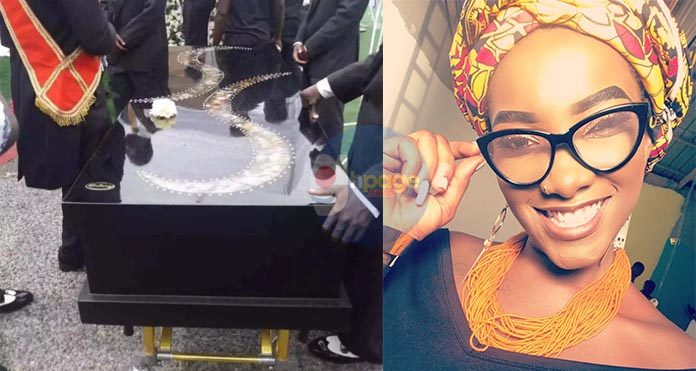 Late dancehall diva, Priscilla Opoku-Kwarteng a.k.a. Ebony Reigns final funeral rite was held over the weekend on Saturday, March 24th, 2018 at the forecourt of the State House.

Ebony Reigns was given a state burial to commemorate her undeniable contribution to the development of Ghanaian music.

READ ALSO: These two amputees took their pre-wedding photos to a different level

One thing that baffled everybody was the black coffin which was used to bury the late dancehall diva because it looked so odd and moreover people associated that to her been an occult or joined a secret society probably the Illuminati.

Michael Dela, Chief Executive Officer of Gisarg Caskets and Coffins, manufacturers of the coffin used to bury the dancehall artist has debunked rumours that there could be spiritual connotations to the choice of colour for the casket.

In an exclusive interview with Citi Showbiz, Michael Dela said his company designed the coffin without Ebony in mind.

“I must be honest, we didn’t even have Ebony in mind but when we were done with it, I saw the casket and said this will actually suit Ebony. She’s called Ebony and her name represents the colour black,” he said.

He added that contrary to the debate going on, the black casket is actually quite common.

“One of the caskets that we sell a lot is the black one. This one was actually one of our newer designs. It was purely done in our quest to do something unique,” he said.

“People who have younger deceased tend to go for caskets that are dark. But occasionally you get people that go for the black casket just for the beauty of it,” he added.

According to him his company which is located at Osu – Forico Mall, had a business relationship with Transitions, the firm that organized Ebony’s funeral and that they only had a call at the last hour that the family had settled on the black casket.

READ THIS TOO: Video: The Heartbreaking Moment When Ebony’s Parents Paid Their Last Respect To Their Daughter

“We got the call at the last hour. It was on a Friday so, with regards to what colour they had chosen earlier, we have no idea,” he added.

“We don’t manufacture things according to people’s spiritual inclinations”.

This comes after Dr Lawrence Tetteh made it known that he knew nothing about the black coffin though he was the one who paid for it.

Share
Facebook
Twitter
WhatsApp
Previous articleThese two amputees took their pre-wedding photos to a different level
Next articleVideo: Leave me in the ring with Koku Anyidoho and I will deflate his Potbelly – Kennedy Agyapong