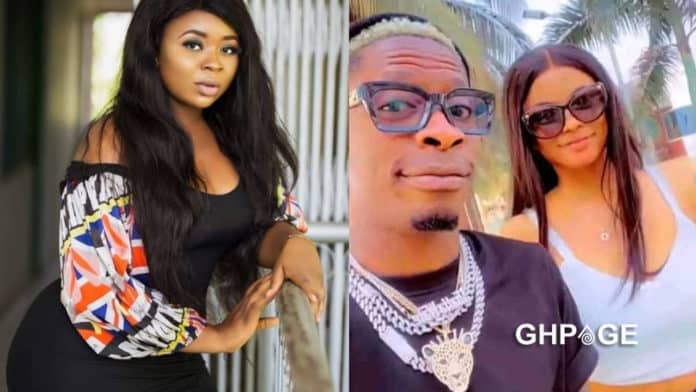 Actress Adu Safowaah has slammed Shatta Wale over his recent assertion that “marriage is a scam”, following his fresh split from his new girlfriend.

The dancehall musician went public with his relationship with Elfreda in January as he uploaded romantic photos and videos of them locking lips to social media. He appeared to be madly in love and even announced plans to marry Elfreda.

But the relationship which was still blossoming seems to have hit the rocks just three months later. Shatta Wale took to Snapchat Monday to expose the cracks in their relationship that compelled him to call it quits with Elfreda who he deemed unfit to be called ‘marriage material” and a “housewife”.

In reaction to the hearty notes shared by Shatta Wale, Safowaah challenged his statement arguing that his inability to stay in a smooth and prolonged relationship with a woman is due to his constant display of lack of wisdom and immaturity.

Safowaah added: “Yes, it some how a difficult journey but if maturity and wisdom comes to play. it the most healing and sweetest experience Ever.”

Shatta Wale had accused Elfreda of nagging a lot, taking advice from her friends and also refusing to support his craft as a musician among many other reasons.

He lamented bitterly about women and why he believed most of them were not deemed to be called ‘marriage material.”

In the midst of the brouhaha, notorious Snapchat user identified on the social media platform as Sel The Bomb has alleged that Shatta and Elfreda broke up last month in the USA.

Elfreda is said to have exited the relationship on the grounds that Shatta Wale is very authoritative, violent and disrespectful.

Well, the split between the two was nothing far from the expectation of Ghanaians who had predicted the future of their relationship.

It is expected that he will take back all the presents Shatta Wale showered on Elfreda including the Range Rover he claimed to have bought for her as a birthday gift.