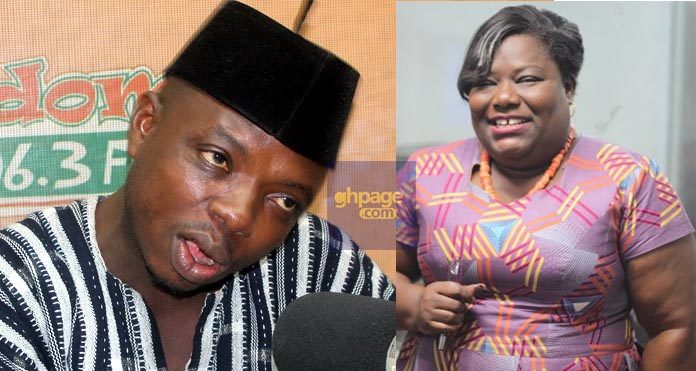 Almost 24 hours since news broke that Lawyer Tony Lithur has filed for divorce against his wife, Nana Oye Lithur citing several of allegations, the first Vice Chairman of the New Patriotic Party (NPP) in the Brong Ahafo Region, Kwame Baffoe has reacted to the news with a stunning confession about Nana Oye.

According to Abronye, he has been secretly admiring Nana Oye and would not hesitate to take over from Tony Lithur after the divorce suit is settled.

“I have loved Oye Lithur for years. I pray her husband leaves her so I can occupy that position,” he claimed.

According to Tony Lithur, his lawyer wife is cheating on him with multiple partners, he is disrespectful towards him, she is violent and he does not fulfil her duties as a wife to him.

Speaking on Adom FM’s Dwaso Nsem morning show on Wednesday morning, Abronye who is not the least perturbed by the allegations against Nana Oye described her “an outstanding human rights lawyer who champion the cause of others.”

“I’m patiently waiting in my one corner. If her husband loses guard, I will snatch her,” he disclosed.

Abronye’s confession could be described as a rare praise from the hard-hitting NPP man who is known for his regular criticisms of the National Democratic Congress (NDC) and its members.

The couple married customarily in 1991 and celebrated the marriage at the Christ the King Catholic Church in Accra in 1997. They have four kids together.