Watch: McBrown captured securing her phone in her pants in Qatar Stadium 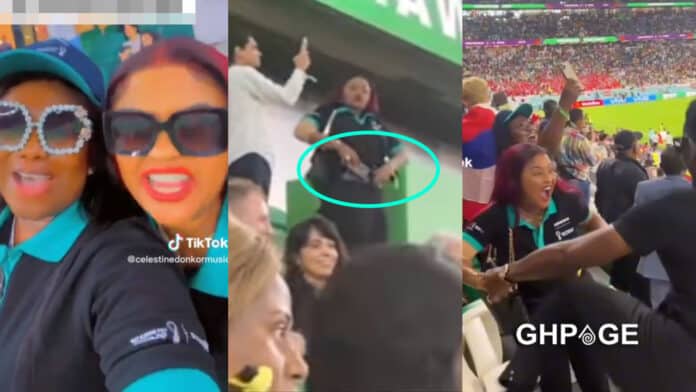 Actress Nana Ama McBrown was filmed trying to secure her phone from getting missing during Ghana’s match against South Korea at the World Cup in Qatar.

There was an intense atmosphere in the stadium when referee Anthony Taylor added 10 more minutes to the regular stoppage time.

Many football fans, predominantly Ghanaians, were left at the edge of their seats waiting for the final whistle in the 3-2 win thriller as many feared the Koreans could equalize in the dying minutes.

As a former footballer and a lover of the game, McBrown could not keep her butt on her seat and appeared very restless until the sound of the final whistle echoed in the stadium.

In a video captured by media personality Okyeame Quophi, who was also at the Education City Stadium, McBrown is seen concealing her phone in her pants in a bid not to lose in the moment of jubilation of Ghana’s win over South Korea.

McBrown was in Qatar to support the Black Stars with her husband Maxwell Mensah, alongside Okyeame Quophi and his wife Stacy Amoateng.

They represented Ghana as ambassadors of Hisense.