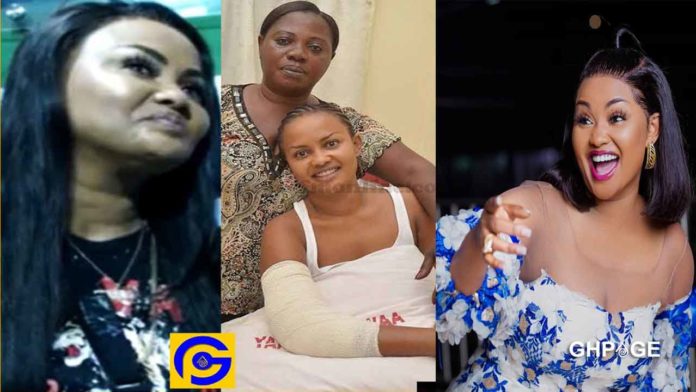 For years her fans across the world have known her by one name and that that is Nana Ama Mcbrown. Many people believe that’s her real name.

From the old days when she started acting through raising to become a household name in the Creative Arts Industry in Ghana, she has used the same name (aforementioned).

Perhaps you might have thought it was her maiden name or something lineal to her family.

Did you know that Mcbrown’s real name is Felicity Ama Owusuaa Agyemang? Oh, You didn’t know? Then you know right here.

The award-winning actress for reason(s) best known to her – probably cos of showbiz- changed her name from Felicity Ama Agyemang to Nana Ama Mcbrown.

Mcbrown’s mother identified as Cecelia Agyenim Boateng has for the first time bared it all on why her daughter changed her name from Felicity to Nana Ama Mcbrown.

Speaking in an interview on Okay FM, Mama Cece revealed ‘Mcbrown’ was added to Nana Ama’s name because her uncle wanted to fly her abroad but wanted it to look like she was his adopted daughter hence the new name.