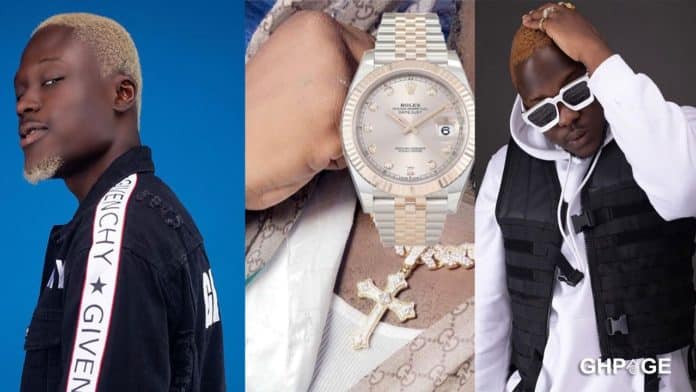 AMG Rapper Samuel Adu Frimpong popularly known as Medikal has been exposed by a German Watch Blog for flaunting a fake Rolex watch.

Medikal, who is known for showing off his wealth on social media shared a picture of a Rolex Datejust watch he recently purchased.

However, a German Watch blog on Instagram known as Munichwristbusters whose mission is to act against fake watches and and their wearers exposed Medikal.

In a long post on Instagram, they gave a vivid explanation as to why Medikal’s watch is fake.

They posted on Instagram; “@amgmedikal With a fake Rolex Datejust. His watch is far too high for an original Datejust. In addition, the bezel is clearly too wide and the notches are far too pronounced. The crown of the watch is not in no way similar to that of an original one.”

Medikal was heavily trolled on social media for bragging about his fake Rolex Datejust watch.

However, his former friend Okese 1 also took to social media to mock the AMG rapper for his fake lifestyle.

In a post on Twitter, the ‘Na Today’ hitmaker asked Medikal if he would confess or defend the allegations against him.

Medikal and Okese 1 have been at loggerheads with each other after the latter accused Medikal of owing him a huge sum of money.