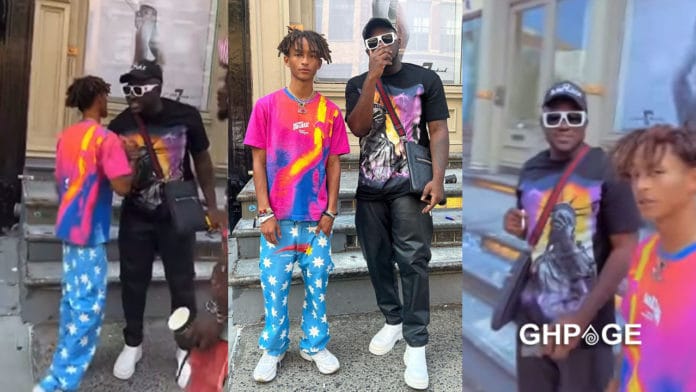 Ghanaian rapper Medikal has been spotted in a video hanging out with young American singer and actor Jaden Smith on the streets of America.

The 29-year-old musician born Samuel Au Frimpong was seen getting acquainted with the son of famous Hollywood actors Will and Jada Pinkett Smith as they shared laughs and hugs.

In the video posted on his Instagram Stories, Medikal was spotted with a group of friends cruising in a Range Rover and a private Benz bus usually allocated to A-Listers.

Although it was their first time meeting, the two artistes appeared as long-time friends linking up again after many years.

Watch how Medikal and Jaden got acquainted in the video below

The purpose of their meeting has not yet been disclosed, however, some social media users have speculated a music collaboration between the two Hip Hop stars may be in the offin.

During the meeting, Medikal wore a black T-shirt over a black leather pants which he matched with a pair of white sneakers and square-shaped sun glasses and a black cap.

Jaden on the other hand, casually wore a multicouloured T-shirt paired with a blue baggy jeans featuring white star-patterns.