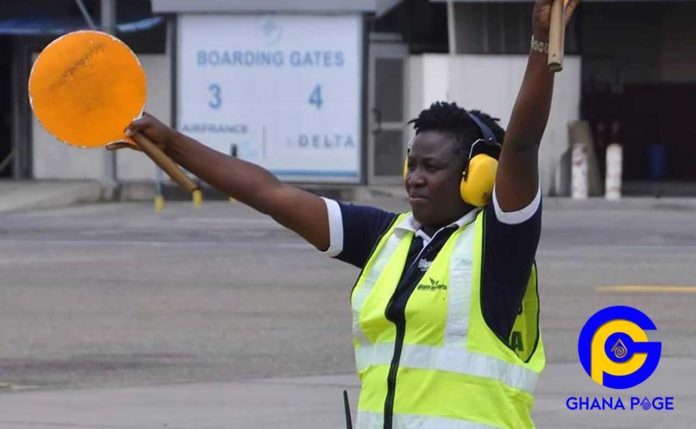 We all aspire to be great people in the world and as such we do all kinds of stuff just to be successful in what our hearts are set to achieve.

That has been the story of Madam Felicia Edem Attipoe, a single mother who was recently honored as by organizers of Ghana’s Most Inspiring Women’s Award.

She was awarded the ‘Most Inspiring Woman in Aviation‘ after which she took to her Facebook page to share her struggles on how she was able to overcome all challenges and became Ghana’s First Female Aircraft Marshaller.

Sharing her sad story of how she became a single mother at the early age of 23, her marriage to her husband ended after she traveled out of the country though she was working with Ghana Civil aviation authority (GCAA) as a secretary.

When things didn’t go as planned she returned to the country and got her job back but transferred to the Ramp section as a secretary (Marshallers Office).

Though she was happy, she was filled with bitterness and pain which made her resort to selling ‘Koko’ at a train station as a way of survival.

Read her full story below:

“Yesterday 14th September 2019, I was one of the recipients of the Maiden Ghana Most Inspiring Women’s Award 2019 at the Golden Tulip. I won the award in the Aviation Category.

I give thanks and glory to the almighty God for how far He has brought me. I dedicate this award to my mum who passed 13th September 2005, 14 years ago.

I was employed at Ghana Civil aviation authority (GCAA) in 1999 as a secretary. Life was good as a young single mum at the age of 23. I worked for 8 or so years and left the country with my husband outside the country. I took 4 years leave without pay to go study. As faith could find me I came home with a “lost marriage” and a broken home. Fortunately I had my job back and was transferred to the Ramp section as a secretary. (Marshallers Office) an Aircraft Marshaller is someone who park planes… It’s a man’s job . I was then going through my divorce process in court. I come to work so confused and with a lot of pain and bitterness. Sometimes I even have to go to court before coming to work. It was painful..I had no life.. bitterness and pain engulfed me. That story of the selling of Koko on the street and at the train station would be told later. A student at African University College of Communication (AUCC) another story.

Finally I got interested in this Job.. Marshallering. I was able to convince my Boss to be part.. Fortunately I was added to the trainees for the job. I failed 3 times . All I needed was just 50 percent. I never gave up. A mist my divorce case at the court, selling Koko and schooling at the same time to get a degree, I made the pass mark. I passed. One of the first Female Aircraft Marshaller in Ghana.