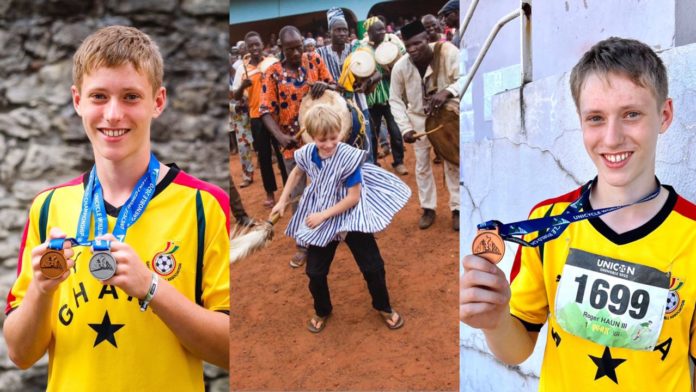 Roger Haun, despite his colour, identifies as Ghanaian and proudly flaunts his nationality.

At the Unicycling World Championships in Grenoble, France, Roger Haun III, a young man from Nalerigu in the North Eastern Region of Ghana, represented Ghana and took home bronze and silver medals.

Before winning the bronze medal in the 50-meter one-wheel race, Haun III finished second in the 30-meter wheel walk race for guys between the ages of 15 and 16.

Roger Haun III’s father, William Haun, thanked Ghanaians for their outpouring of support for his son after the athlete won two medals in the current Unicycling World Championship.

“The kindness of #Ghanaians never ceases to amaze me. Thank you to all who have shown love to my son & me over the past few days. It is very encouraging. #goGhana #Mamprugu,” William Haun tweeted.

The Hauns are missionaries who have resided in the Northern part of Ghana for years and made there their home.

They identify as Ghanaians although they are not originally from Ghana.

Roger Haun was actually born and bred at Nalerigu in the North East Region Region.

Dr. George Faile Sr., a missionary for the Southern Baptist Foreign Mission Board (now IMB), founded the hospital in 1957.