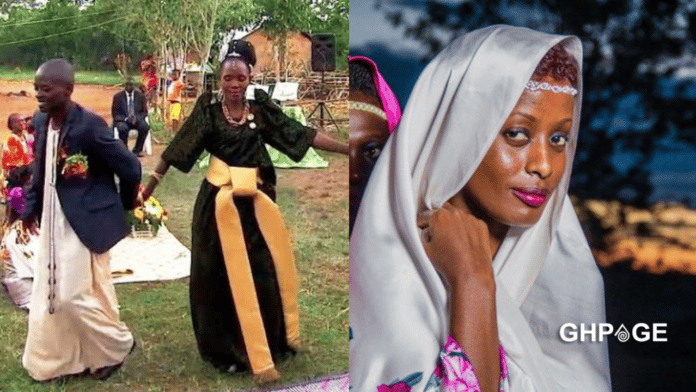 Marriage in this Bayankole tribe is of great importance as parents derive joy and pride from their children’s marriage.

According to this Ugandan tradition, when a girl gets to the age of eight or nine, it is the duty of her aunt to groom her for family life.

READ ALSO: “Not having sex before the age of 25 is an embarrassment” – Lady says

Virginity in this culture is held in high esteem so the girls must abstain from premarital sex.

If one is found not to be a virgin before marriage she is to face the death penalty or ostracisation from society.

The Ankole tribe consider the slim physique unattractive. To them, fat is simply sexy. So when girls get to the ages of eight and nine, they are required to go through a fattening process.

This is usually done to speed up the weight gain of the girls so they can attract a husband.

The Banyakole marriage involves several ceremonies including a giveaway period known as “Kuhingira” where the relatives and friends of the bride present her with gifts such as cows and other food items to take to her matrimonial home.

On the wedding day, a feast is organized at the bride’s home where the father is to slaughter a bull while at the groom’s home there is also a feast to consummate the marriage.

But first, there has to be one last ceremony, that involves tests that must be done by the bride’s aunt.

It involves the bride’s aunt testing the sexual ability of the groom by having s€x with him. This is to make sure they are potent.

During the act, she learns all his sex tricks as well as his favourite styles so she can gift her niece with pointers on what the goom likes sexually.

After confirmation is done the bride is then taught by her aunt and allowed to consummate the marriage by being sent by her Aunt to the husband with her blessings.

READ ALSO: How to last longer in bed