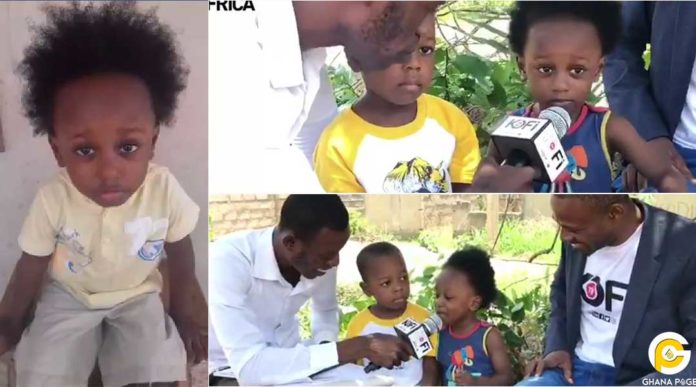 He is Owura and at only two years old, he has gained worldwide recognition because of the level of the great intelligence he possesses.

A few weeks ago he stunned social media with knowledge of the Bible and the world’s capital cities.

Undoubtedly, he is blessed with extreme qualities which are far beyond his age—he knows way too much.

This little boy took to social media by storm after exhibiting a very deep knowledge of the Bible and other matters. The boy, just two years old recited all the names of the books in the Bible and even render many popular quotations without difficulty.

The father, Richard Kofi Addo, who spoke to Kofi TV made a shocking revelation that—Owura who share the same brilliant qualities with his older brother, Nana has never been to school.

He narrated that, he lost his job and because he couldn’t afford the kind of school he wished to enrol his children decided to teach them on his own at home.

Richard said he discovered their talent and started teaching them when the younger one turned a year and a half older.

“It started when he was one and half years old. I realised that he could sing – word to word- any song I play at home, so I decided to teach him certain things if he will be able to remember.” The father revealed.

These young kids as we saw on social media— on Kofi TV —virtually mentioned the capital city of any country in this world.

He also revealed that he taught Owura and his brother countries and their capitals in the middle of January, and surprisingly Owura used about three weeks to a month to learn them.

According to his father, Owura can mention 140 countries and their capitals.

In a Facebook live streaming sighted by GHPAGE.com, there were made to recite the books in the Bible in order from Genesis to Revelation.

He could also mention the names of the month in the sequential order, English names of any animal one mentions in Twi among other displays of their impeccable brilliance.

Richard Addo stays with his humble family of 5 stays in Ashanti Region, Kodie. A husband to his wife and a father of three children, Nana (Eldest), Owura and a newly born child.