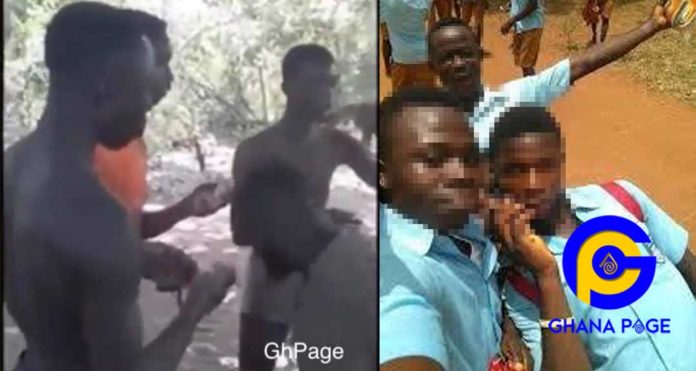 Abukari Anaba, Prince Antwi and Peter Owusu Oduomi the 3 men who forced 3 Senior High School Students from Akumadan SHS to chew raw chicken they stole have been fined by the Akumadan Magistrate Court on the charges of conspiracy to commit crime and assault. They were convicted on their own guilty plea on Monday, 4th February 2019.

The fourth person who was seen in the video, Osei Francis pleaded not guilty and was granted GH¢10,000 bail. He will be in court on 11th February 2019.

3 Male students of Akumadan Senior High School in the Offinso North of the Ashanti Region of Ghana was made to chew an uncooked fowl they stole and killed in the Akumadan Town.

In the video which went viral, the 3 boys who are students of Akumadan SHS were wearing only their boxers in the midst of angry mob being forced to chew the raw chicken.

According to the angry mob in the video, the boys will be sacked from the school if they report to the authorities in the school that they were caught stealing fowl in Akumadan town.

THE STUDENTS CHEWING THE RAW CHICKEN

For not reporting the students to their authorities, their punishment for stealing was that they should chew everything bit of the fowl they killed. Left with no option, the boys could be seen chewing the chicken as if their lives depend on it.