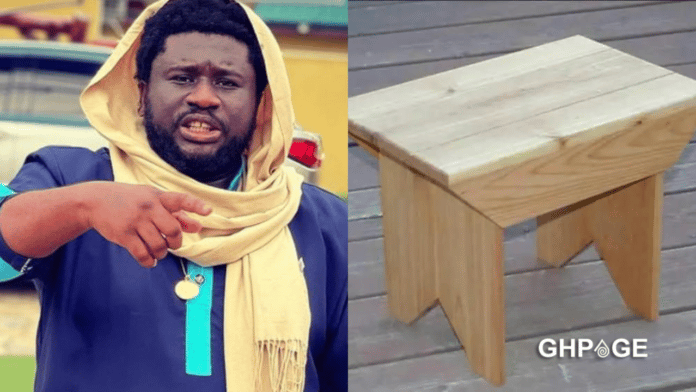 Leader and founder of the Ajagurajah Movement, Bishop Kwabena Asiamah aka Bishop Ajagurajah has made a shocking revelation during an appearance on Kingdom FM.

According to the spiritual man of God, it’s an abomination for a man to sit on a kitchen stool.

He explained that the kitchen stool is meant for only women hence any man who playfully sits on it is spiritually destroying his finances.

As detailed by the controversial cleric, only a foolish man will sit on a kitchen stool because it destroys the finances of men.

READ ALSO: Spirits will haunt you if you pick money from the floor – Prophet Ajagurajah claims

Bishop Ajagurajah spotted barefooted in a queue at Waakye joint

Bishop Kwabena Boakye Asiamah, better known as Ajagurajah, has been filmed at a Waakye joint buying what appears to be one of his favourite foods.

After his previous unpleasant encounter with a ‘disrespectful’ young man at a similar food joint, the renowned man of God made a second attempt at proving his humility.

A new video sighted on social media by GHPage shows a barefooted Bishop Ajagurajah patiently waiting in line to buy his food as he interacts with some youth he met on his arrival. READ MORE HERE