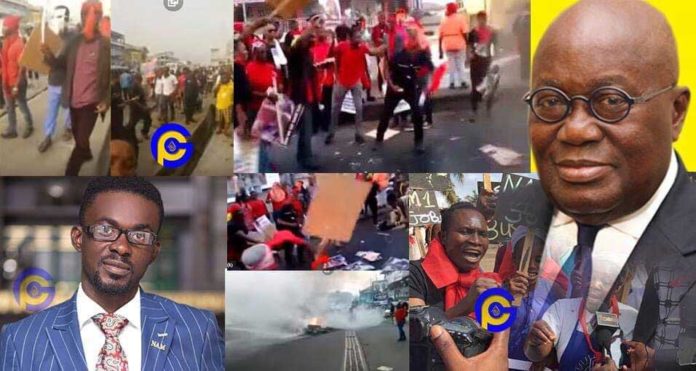 Aggrieved Menzgold customers currently demonstrating in Kumasi have invoked curses on the CEO of embattled gold dealership company, Nana Appiah Mensah aka NAM1 and the president of Ghana, Nana Addo Dankwah Akufo-Addo with eggs and schnapps.

The angry customers who have invested millions of cedis in Menzgold rained curses on NAM1 wherever he is hiding to refund the money or have the gods to deal with. They invited immense suffering unto his life if he does not refund their money to them.

The customers who can not understand why the government of Ghana is quiet about all this brouhaha invoked curses on the president and his government if they continue to display the “We careless attitude” being exhibited and watch NAM1 flee with their hard earned money.

According to the aggrieved demonstrators, the government stepped in and stopped Menzgold business with the explanation that it is operating illegally. So if the business is illegal, why has NAM1 not been arrested or made to refund the money has collected? the investors quizzed.

Watch the Video below

As it stands now, the whereabouts of Nana Appiah is unknown. Menzgold has shut down completely and workers have been laid off. Stay with Ghpage.com for more updates.

SEE ALSO: Borga in hot waters for abandoning his wife in US to secretly marry a Slay Queen in Ghana [Photos]

This world we are in is full of calculated and uncalculated events, that seemingly look like its part of the natural laws...
Read more