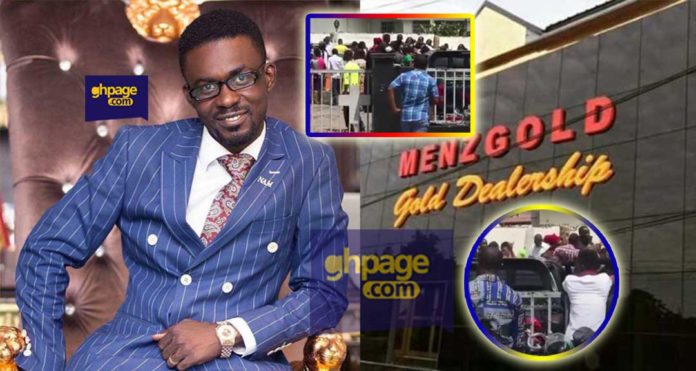 Menzgold Ghana Limited has brought an end to its operations today Friday, October 5, 2018, after it promised to pay customers their monies today after they had subsequently set Ftoday for the redemption of matured investments.

A press statement purporting to be from Menzgold popped up asking investors to come for 50% of their principal as a sign of good faith has popped up online but described as a fake press release by the management of Menzgold.

According to the press statement which was identified as a fake release, in light of the court case between Menzold, Bank of Ghana and the Securities and Exchange Commission, Menzgold wants to give customers the opportunity to take 50% of their principal if they so desire.

It explained that management reached the decision following countless appeals and grievances from their customers to take their principal.

It further stated that, besides the schedule being used to pay dividends to investors, another schedule will come out detailing when investors can go to Menzgold branches for 50% of their principal.

Menzgold has indicated that the decision to shut down its operations had become necessary due to what it has described as “assaults on staff and threats by arms to lives and properties by aggrieved clients.”

Whilst apologizing for the inconvenience caused, the company said it will communicate the way forward on Monday, October 8 2018.

Menzgold has said it is unable to pay its customers matured dividends on their gold investments due to the action that was taken against it by the SEC.

Read this: Did NAM1 trigger Menzgold collapse to rescue his crumbling finances?

In all these has the PRO, George Quaye stepped down amid back and forth with the Bank of Ghana and Securities and Exchange Commission, Ghana (SEC).

George Quaye has now been appointed as the PRO of IMAGE BUREAU and is set to leave Menzgold by next week.