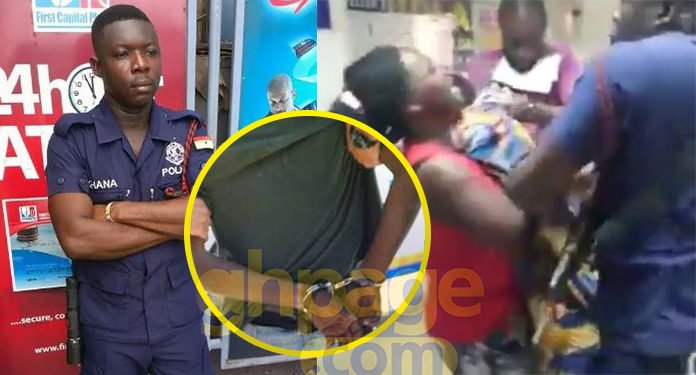 According to the court, presided over by Mrs Jane Harriet Akweley Quaye, the sureties must be gainfully employed and must not earn less than Gh¢500 a month.

Three other staff of the bank, Joycelyn Kukua, the Operations Manager of the Company; Shirley Portia Anaman, Customer Care Officer; and Prince Ayensu, a driver, all of whom were charged for abetment, were also granted bail on Thursday, 9 August 2018.

Lawyers for the four argued that their clients would not abscond when granted bail, but would always appear before the court to defend themselves.

It all happened when the officer, who was serving as a security detail at the financial institution, was called to escort the nursing mother who had gone there to withdraw her GHC270 she had saved with the bank out but ended up beating her in the process.

The Bank denied to give her the money with an excuse that they were experiencing a network problem thus couldn’t conduct the transaction. She disagreed and cried out for the bank to give her her money since the child was hungry and needed food.

After many attempts to retrieve her money from the bank, Madam Patience decided not to leave until her money was given to her.

Members of the public expressed outrage over the incident and subsequently the policeman was arrested and placed in custody whilst investigations into the case started.

He has already been interdicted and his uniform and all other police accoutrements taken from him.

Meanwhile, management of Midland Savings and Loans Company Limited has compensated Patience Sarfo with a brand new 3-bedroom house. In addition, she will receive an amount close to GHC200,000 from the Midland savings and loans.

read also: Photos of the 3-bedroom apartment given to the woman who was assaulted by the Midland police