Video: A Mighty ‘Intensely Violent Wind’ Blew In Our House The Moment Ebony Arrived At The Gate – Aunt who took Ebony’s last video finally opens up 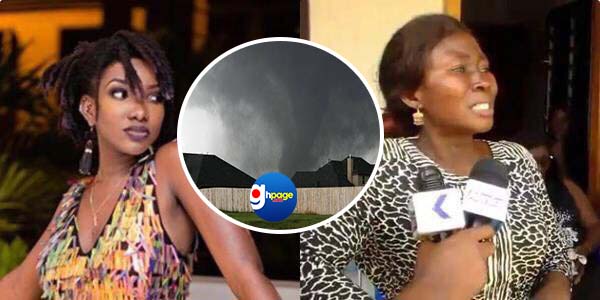 Madam Mercy Frimpong, aunt of the late Priscilla Opoku-Kwarteng, popularly known as Ebony has narrated what happened on the day Ebony visited her mother in Abesim, Sunyani.

In an interview, the aunt recounted how Ebony got to Sunyani and during the recounts said something that has caught Ghpage.com‘s attention.

According to Madam Mercy, Ebony’s visit to Sunyani was supposed to be a surprise. She said, Ebony, phoned her mother and requested that they prepare “ampesi” for her.

She also indicated that the musician later called to change her request and asked for Jollof instead.

She continued to say that when Ebony got to the gate leading into their house, a mighty ‘intensely violent wind’ blew causing all the people to seek shelter on the veranda —Which Madam Mercy interpreted it as a sign of a great person visiting the house.

According to Madam Mercy Frimpong, Ebony’s mother asked her to sleep over and leave the next morning but that didn’t happen.

READ ALSO: 5 Things Ebony Did Before Her Death

She said they later heard rumors that Ohemaa, as Ebony was affectionately called, had passed on but Madam Mercy Frimpong did not want to believe the news.

The Dancehall Diva, Ebony Reigns was returning from Sunyani after visiting her mom who had come down from the UK and got involved in a car accident and died with two others at the Bechem Government Hospital.

READ ALSO: Video: Shatta Wale Was A Gong-gong Beater In ‘By The Fire Side’ – Maame Dokono Reveals

She was in a Jeep 4×4 car which collided with VIP bus at the Bechem Junction(Nkwanta).The driver however survived and is receiving treatment.