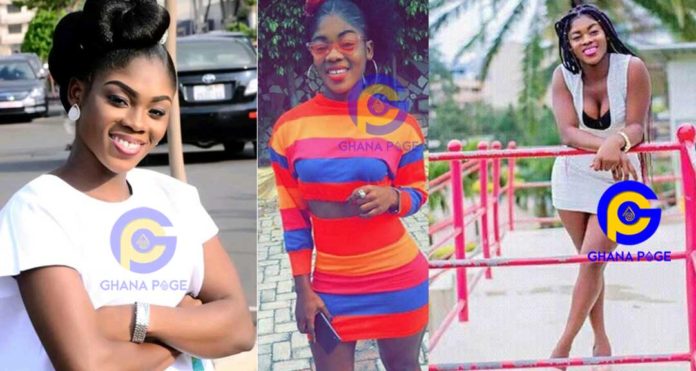 Ghpage.com reported about a beautiful 21-year-old lady, Cecilia Konadu Boakye aka Milton Whamper who has allegedly committed suicide after her naked photos and videos were leaked online by her Fraud boyfriend after she dumped him.

Well, it will surprise you just as it came as shock Ghana Page that Milton Whamper is not dead. In fact, she has never been dead.

The brother of Milton Whamper, Solomon Agyai personally called Ghana Page to clarify the situation and he had much to say.

He confirmed most part of what Ghpage.com reported about Milton Whamper. According to Solomon Agyei, the boyfriend of Milton who is a big-time fraud boy leaked the videos on social media after Milton dumped him as Ghpage.com reported.

He tried all he can to get Milton back but she refused him because of his wayward life. Out of the pains, he leaked the pictures through her own Facebook account to her friends as reported by Ghpage.com earlier.

However, after Milton still refused to give the boyfriend space, he designed the obituary posters and together with his friends leaked the death report and pushed it to go viral.

The brother of the young lady denied the death of Milton and insisted all the death story was begun and spread by the boyfriend after he has leaked the photos and video to further shame.

Currently, the report has been filed with the police and the guy has been declared wanted. Milton, however, is still going through the emotional stress and has deleted her social media accounts.

Listen to the narration below

Reports went viral on Tuesday 29th January 2019 that a young lady identified as Milton Whamper born Cecilia has committed suicide after her boyfriend leaked her naked video and photos.

SEE HERE: Tears flow as Funeral Poster of Milton Whamper, the lady who committed suicide after her sex video was leaked by her Sakawa boyfriend pops ups online [SEE]

Later in the week, a funeral poster of the lady popped up online drawing tears from her friends and sympathizers on social media. The poster stated she was to be buried on 9th February 2019.