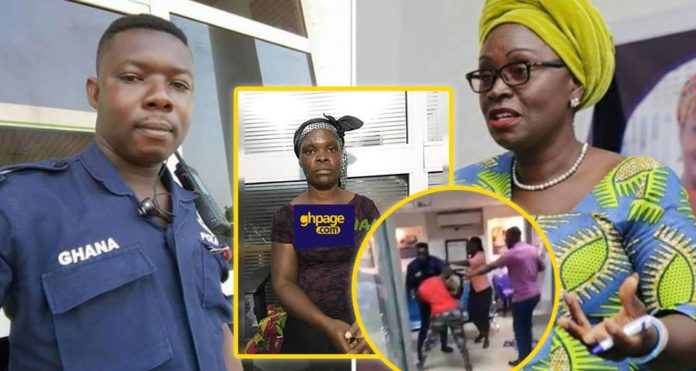 The hottest topic on the lips of most Ghanaians especially on social media have yet raised questions on the conduct of some police officers in Ghana who tend to put the law into their own hands at the mercy of helpless citizens.

Speaking to the Deputy Minister of Gender and Social Protection ‘Mrs Gifty Ampofo Twum’ on Peace Fm, she however stated that, the conduct of the policeman wasn’t the best and such acts are against minors and women in the country, which shows the highest level of lack of respect for women in Ghana.

According to the Minister, it was unacceptable for a “policeman to be that hostile, to be so wicked, to be that barbaric to another woman, questioning why she is trying to access her own funds and deposit at a Bank.

She also added that she was very shocked and in deep sorrow after watching the alleged video as the policeman continued to abuse the woman without heart.

READ ALSO: Ghanaians react to the assault of woman at a bank by police officer

She further said she has made calls to DOVVSU (Domestic Violence and Victim Support Unit) and also IGP immediately after seeing the video and told them to take action’s on the matter.

According to the deputy Minister, Only a policeman who is on drug’s could do this harm to an innocent citizen, she also stressed that she would mobilize women to demonstrate and hit the roads if nothing is done about this matter and persons in the high office try to conceal the matter.

READ ALSO: Some Ghanaian celebrities have reacted to the policeman who beat up a woman with her baby

This incident has seen some social media users expressing their disgust at the video circulating on Facebook, whiles most of them are calling for the police to be sacked from the force, others are cursing the police officer with every everything you can imagine.

Watch the full video of the Assault below;

READ ALSO: Kwadwo replies Ohemaa Glory after sharing screenshot of their chat to disgrace him