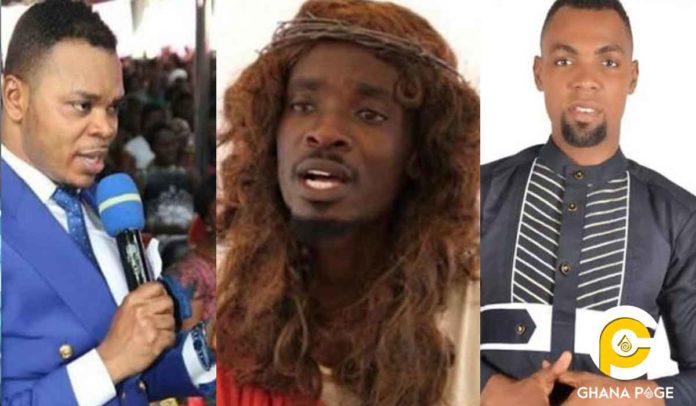 Kumawood actor popularly known for the viral ‘Local Jesus’ comedy skit, Mmebusem has recently released a new video after the issue he had with his producer Salinko.

This time around Mmebusem originally known as Justice Hymns tackled the ongoing fight between the two popular men of God, Rev Obofour and Angel Obinim.

This is actually the first video the Kumawood actor has dropped after his former producer Salinko tagged him as ungrateful and disrespectful.

In the video that has set the internet buzzing, the comic actor dressed like ‘Jesus’ with his disciples hilariously quoted some verses from the bible on why men of God should not fight against each other.

This comes after Salinko who is the producer of “Boys Abre” recently had a misunderstanding with Mmebesum where he also seized the ‘Jesus’ attire from him.

According to Salinko, after the video went viral Mmebusem has become proud, arrogant and disrespectful.

Well, it seems Mmebusem has moved on from this issue and has recently dropped a new skit which has already gone viral.