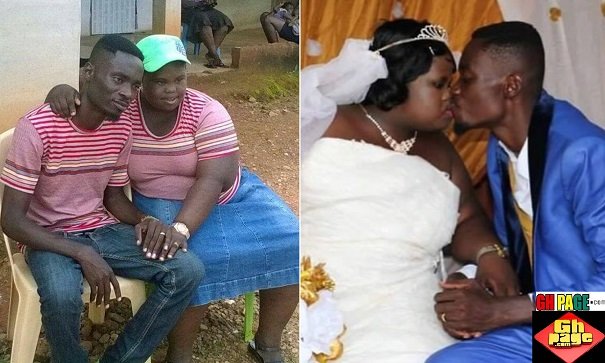 Finally, Finally, the Kumawood actor, Mmebusem’s controversial marriage is on the verge of bearing fruit as he announces that his wife is heavily pregnant and will make him a proud dad very soon.

Their marriage brought a lot of commentaries and criticisms including some from his colleagues.

Kumawood actor Big Akwes on Royal TV terribly described the “wife” of the actor and alleged the lady as a cursed one. He also described her as a cheap product only worth of marriage because of the benefits the actor will enjoy.

Up till today, many people thought Mmebusem will leave the wife after getting ( the money ) what he went into the marriage for.

READ ALSO: Photos: Social Media Users Can’t Get Their Heads Around This New Photoshoot Of Kumawood’s Mmebusem And His Wife

But it seems the different way as Mmebusem has revealed that his wife Abena Boatema is currently in abroad to deliver their first child and will be back home after the cry of the baby.

Mmebusem speaking in an interview on Kumasi based Royal TV accepted that he has shutdown all critics who were throwing punches and all sort of attacks on his marriage.

“Nobody should be surprised by how she got pregnant, what is important here is that she’s pregnant and has proven to the public that I am a real man”, he said.

According to the actor, marrying his wife has done him more favor by making him more famous than his chosen career, acting.

“If I knew I will marry and become this famous, I wouldn’t have worried my head about acting’’, he added

READ ALSO: Here are the 5 Sad Manager-Artiste Breakups in Ghanaian Music Industry|#4 Was A Nasty Breakup

Mmebusem showing his love made it known that he has composed a lovely sweet song in honor of his wife, and it will be released as soon as she returns home from abroad.

It appears that the actor is very happy and enjoying every bit of his marriage with Abena.

You might be interested to see Kumawood’s Mmebusem Shares More PHOTOS with his Wife says, he is still enjoying his Marriage