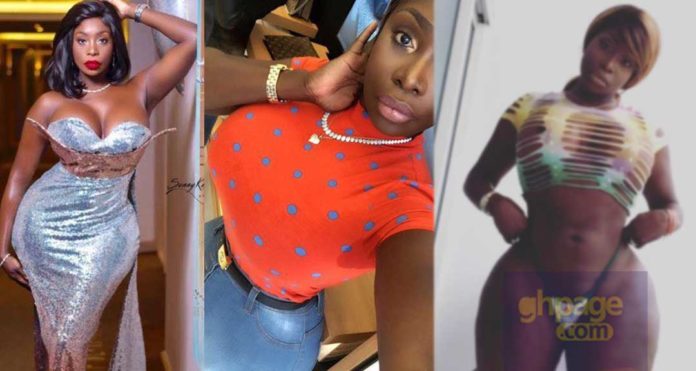 Popular American video vixen and model, Symba has narrated a story of how her panties together with her friend’s panties went missing at a hotel room in Nigeria during a short stay there.

Apparently, Sakawa (Money ritualists) are using women used panties for their ritual sacrifices and they are buying it for huge sums of money from anybody who could provide them. And this practice is very popular in Nigeria and Ghana.

The exceptionally curvy and beautiful model was lucky enough to identify her panties missing and notified the authorities about it. She made it clear she suspects the cleaner who just left their room.

When the cleaner was summoned and interrogated, he provided the panties together with her friends, when she had not even realized her panties were missing.

“A few days ago I went to my friend’s hotel which is Villa Thirty Three in Lekki, my girlfriends are staying there and I was at the office for the whole day, so I decided to go by their place to shower. I showered and I ended up staying there. When I stayed there overnight.”

“The next morning now, somebody cleans up before I woke up. Somebody cleans the room. I showered and I leave, I’m gone for the whole day and it’s like 8 pm now, the night after, and something keeps telling me, “go to Gizel’s room!!”, “go to Gizel’s room!!”, so I go upstairs now, and I knock on the door so I go and change in the bathroom. When I got to the bathroom, no panties” she said in a video message posted online.

SEE ALSO: Guy shares images of 23 ladies that he has banged on social media

She asked her girlfriends about the missing panties but they had no satisfactory answers about the missing underwear. She recalled how a male cleaner was moving around her room suspiciously while he cleaned up the room. She later forwarded her complaints to the hotel management.

“I wanted to make a report on him (cleaner) cos I didn’t like the way he was moving. Like I was in the shower, he went downstairs to go get me a towel, he came back upstairs and gave me this long stare. He wasn’t just moving how a cleaner should move. So I went downstairs to speak to the management. Management comes and management is like. I’m management “I left my panties in the bathroom and after the cleaner cleaned, its missing,” she said.

SEE ALSO: Forbes lists top 10 Richest musicians in Africa for 2018 and their net worth

“I insisted that my panties were missing and I had a video of the last location which wasn’t necessarily true. The cleaner was confronted about this and he admitted that he threw away the panties. I instructed the cleaner to go fetch my panties from the trash can no matter how long it would take him. In about 7 minutes, the hotel cleaner later returned with two panties in a plastic bag. The other panties belonged to my friend who didn’t take notice of her missing panties,” Symba Narrated on social media.

From what Ghpage.com has gathered, this practice of stealing used panties is everywhere especially in most African countries so ladies be extra vigilant.