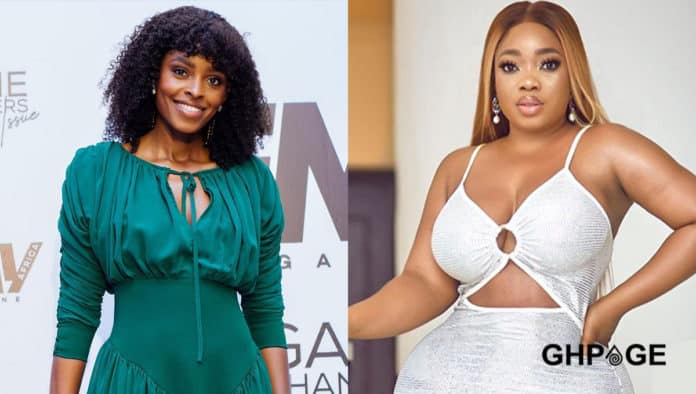 Ghanaian-Nigerian fashion icon and actress Victoria Michaels has given an update on how Moesha Boduong is doing, following a viral video of her suicide attempt that has sparked conservations online.

Many people who saw the video had suggested that Moesha Boduong could be going through some stages of psychological trauma including depression and needed to be given proper care to prevent her from causing any harm to herself.

Scores of Ghanaian celebrities also took to social media to express their concern for their colleague and extended some words of encouragement to her. Others prayed for her, believing that she will overcome what she is currently dealing with.

Speaking on Moesha’s physical and mental well-being, Victoria Michaels, who reportedly assisted the former Slay Queen to go through her transition into Christianity said her sister-in-Christ she’s “fine and in a place where is being taken care of and counselled.”

In a lengthy post on Instagram sighted by GHPage.com, she also addressed allegations that Moesha had sold all her properties including her Range Rover Evoque and donated the proceeds to the church she currently fellowships with.

Victoria Michael wrote: “My sister-in-Christ Maurecia @moeshaboduong is fine and in a place where is being taken care of and counselled. Please stop spreading lies about me, Pastor Gabriel, the church @wearerevelationint and the body of Christ.

“You all have no idea what is going on. My sister @queenafiaschwarzenegger knows more than anyone else that Maurecia called people to her home and gave things out to the poor for reasons I can’t share . I knew nothing about it until she mentioned it on phone. That’s all I can say for those spreading lies.

“Do not allow what you see on social media to mislead you. Not all that glitters is gold my people.

“Maurecia is still here with us and she will eventually come out and tell the truth you all seek. May God forgive all the people spreading lies.

“All I expect the body of Christ to do now is pray pray pray for the salvation of her soul so that what the lord has began in her life will be permanent.

“I am not perturbed by the lies. I just had to clear the air.

“The battle is beyond the physical but the Lord has given us victory already.

See a screenshot below: