Video: Moment Uche Maduagwu described Jim Iyke as a ritualist leading to him getting assaulted 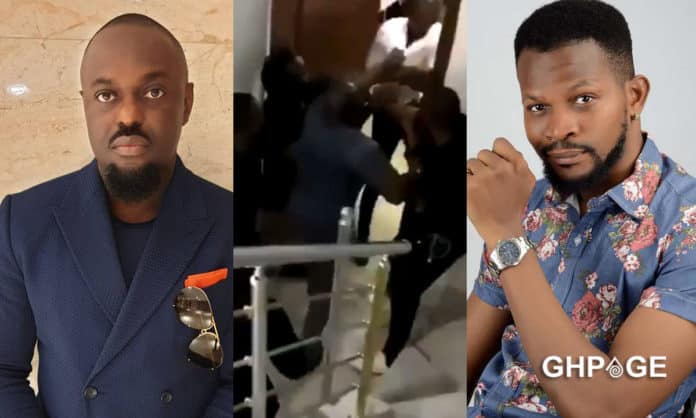 A video showing the moment actor Uche Maduagwu labelled his fellow star Jim Iyke a fraudster and ritualist has surfaced following an altercation between the two on Tuesday.

A few days ago, Maduagwu had taken to social media to launch a scathing attack on Iyke on grounds that he lives an expensive lifestyle in Lagos and Abuja.

Maduagwu argued that while he makes “clean money” and dresses in expresses clothes he’s not celebrated for his fashion sense but, Jim Iyke is always stealing the spotlight for his lavish lifestyle despite the source of his health being unknown.

“Look at the expensive lifestyle e dey live up and down in Lagos and Abuja. Someone told me e no dey buy expensive clothes from Naija again, e now import the most expensive ones abroad. Please, what is his source of wealth again?” he wrote in Pidgin English.

The above remarks appeared not to have gone down well with Jim Iyke – real name James Ikechukwu Esomugha – who stormed Uche Maduagwu’s production studio to confront him.

In a video that has gone viral, an irate Jim Iyke was seen kicking the actor until he was held back by his friends.

Maduagwu threatened to sue Iyke for assault but the latter seemed ready for any legal action from his colleague.

He vowed to face himself squarely wherever their paths cross.

Uche Maduagwu is popularly known for insulting and making defamatory comments about the lifestyle of celebrities.

This video has garnered massive reactions from social media users who are hailing Jim Iyke for teaching Uche a lesson.

blaqtessie wrote; “It’s about time. This guy too too talk. I love Jim”.

dumebiblog added; “So apparently Oga Jim find am go house go beat am. So all those Nollywood films no dey lie be that”.

fabolouslizy stated; “This fight sweet me”.

pumpkin2303 has this to say; “The werey no even get strength sef. You people should allow Jim remove just one teeth from his mouth”.