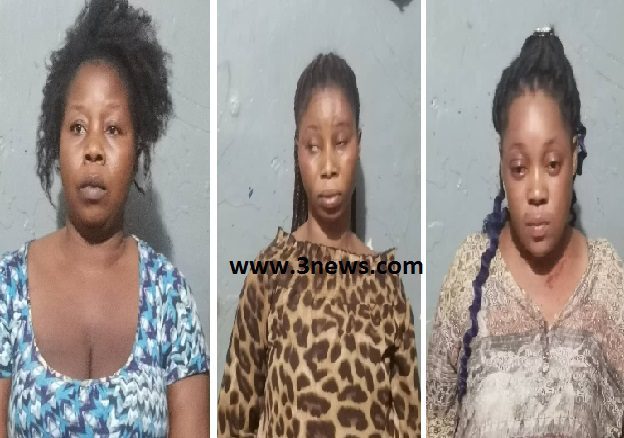 Three women, including a lactating mother, have been arrested and are assisting police with their investigation in Obuasi.

According to reports, the suspects, who are from Kumasi, were nearly lynched by enraged residents after attempting to defraud a mobile money vendor in Sanso, a community in the Obuasi municipality.

“The three suspects were granted bail of GH5,000 each with two sureties,” he told the show’s host, Aduanaba Kofi Asante Ennin. The trio remains in police custody because they have not met all of the bail conditions.”

He urged all Mobile Money agents to be cautious and to ensure that such confident con artists do not take advantage of them.

A resident of Sanso, the community where the incident occurred, told GhanAkoma that “the angry residents would have lynched the suspects but for the timely intervention of a unit committee member for the area who rescued the suspects and hid them in his room.”

“It happened on a weekend, so I was at home.” All I could hear in the backyard was noise. When I arrived, three women were being held for allegedly defrauding a Momo vendor.

They had successfully sent GH1,500 to a nearby agent, and when they left, the agent realized their money was a forgery, so he followed them, only to discover they had stopped at another agent, attempting to dupe him by sending another GH1,500. As a result, the agent raised the alarm and the residents attacked the suspects then the unit committee member intervened.”

Eunice Sarfo, 33, Nancy Owusu, 28, and Cecelia Agyeman, 29, have been identified as the three suspects.

According to DSP Martin Asenso, the trio has been granted bail, and the case will be heard in court on Monday, February 7.