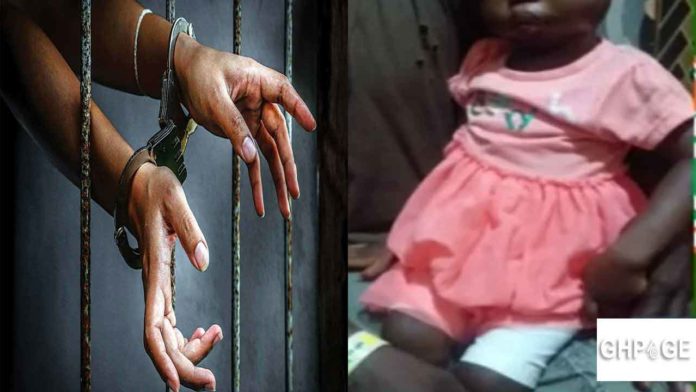 A woman is currently in the grips of the police for beating her 4-year-old stepdaughter to death.

The deceased identified as Maadwoa was reportedly living with her father and wicked stepmother at Pokuase, a suburb of Accra when the unfortunate incident happened.

According to the Nkusuohene of the area, he has been informed about the wicked treatment meted out to Maadwoa by her parent and he warned them against it.

The Nkusuohene explained that his warning fell on deaf ears and they continued to abuse the 4-year-old girl who passed away yesterday.

He later reported the incident to the Pokuase police after he heard about the little girl’s death and her stepmother was arrested.

Maadwoa’s father took to his heels when he saw the Nkusuohene in the company of the police officers.

In an interview with some neighbours, they revealed that the 4-year-old girl has been going through hell in the hands of her stepmother.

According to them, the suspect locked Maadwoa in the room for three weeks where she has been constantly abusing her with wires.

They complained bitterly and warned the suspect to stop beating her stepdaughter but she refused until she killed her.

The police are currently on the hunt for Maadwoa’s father over his involvement in the death of his daughter.