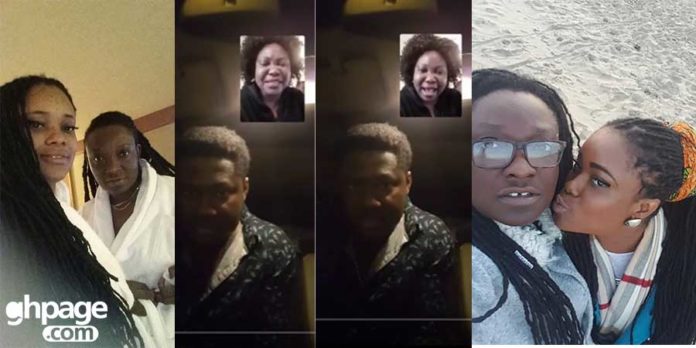 The mother of one of the Ghanaian UK based Lesbians (Linda Ampadu also known as Deelyn) known as Nana Abena Konadu has finally shared her view on the situation of her daughter.

According to Nana Abena Konadu, she is really disturbed and worried because her daughter hates her and is living a kind of life she is not impressed with.

ALSO READ: The UK based Ghanaian lesbobos hit back at Ghanaian again

She disclosed that Linda’s father, Isaac Ampadu left Ghana to Italy when she was 7 months pregnant with Linda and she took responsibility for her until she also left Ghana.

“I left Linda with my parents and honestly my parents were not rich but they made sure we were well catered for. I didn’t leave Linda with anyone to maltreat her”, she said.

Nana Abena Konadu also disclosed that she brought Linda to Holland at the age of 10 and after some years started displaying some attitudes which really left her disturbed.

“She decided not to go to school anymore and also was shoplifting with her friends and living a bad life. She is fearless and disrespectful“, she noted.

She also revealed that she was abused by Linda’s father which resulted in her moving from Italy to Holland where she met her current husband called Opoku and also decided to bring Linda from Ghana to Holland to live with her.

According to the video, the mother of Linda further stated that there were several times that Linda was picked by the Police and it got to a time she was tired of going to the Police station to pick her up.

“I was fed up with her disrespect and insults so I deceived her and took her back to Ghana to stay with my sister at Tema. Honestly, my family in Ghana has blocked any contact with Linda because they are disgraced with her current status“, she added.

The two UK based Ghanaian lesbians have been in the news for some time now since their bedroom video went viral.

These two lesbians known as Deelyn and Dorcas are very popular among the Ghanaian community in the UK.

The video received condemnation from Ghanaians who frowns on same-sex relationships but these two lesbians are not bothered about that.

It was also reported that Linda was married to a man called Fiifi with whom she has three children.